I can usually rely on Martin for his comprehensive account of the days events. This year his leg had not sufficiently recovered for him to take part. Perhaps he had anticipated the weather forecast. At the start of the week the long range forecast was for a dry day. The closer we got the weekend the worse it got. By Saturday night we were going to start in rain and finish in heavy rain and by Sunday morning it was going to be heavy rain all the way round. This year I was joined in the challenge by my brother along with 300+ other riders. As we set of in the car to drive to the start the rain started but it had stopped by the time we reached the top of the M62. The ride started in the dry and apart from a very light shower as I climbed the last hill remained dry all the way round. The BBC forecast and every other one we looked at were all wrong.The later riders had some light rain on Midgely Moor. A strong wind added to the challenge but the winner got round 8 minutes faster than his time the previous year. The event was fantastically organised as usual and had even more marshals out marking the routes. The second steep hill just after he start was traditional warm up to the event with several cyclist deciding to walk rather than put to much strain on the gears! Midgely Moor was its usual challenge of mud, bog and drainage channels . I stopped on the descent to lend my bike pump to a cyclist who’s CO2 canister had failed and pump did not work. A good excuse for a slower time. My ride was completed in 3 hours and 15 minutes. Next years event is on Sunday 12th October. Plenty of time to do some training. 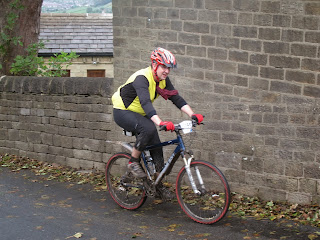