An excellent breakfast set us up for the final push to Paris. We were eating as soon as the restaurant opened at 7:00 and we packed and ready to set off by just after 8:00. 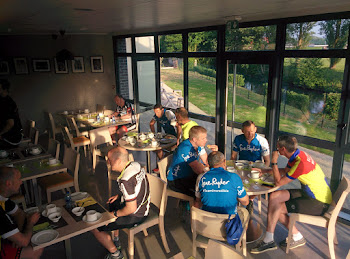 The first 15 miles out of Amiens were along the main road. It's started with a gentle climb onto the plain. The traffic thinned as we left the town and the traffic that past us was very courteous leaving us lots of room.
We had planned the first stop at 20 miles but changed it to 25 miles to give the van a chance to catch up. Tom and Elizabeth had gone to the supermarket for provisions in Amiens and were still loading up when I called them at the 15 mile point.

After 15 miles we were away from the main roads and continued to the outskirts of Paris mainly on minor roads and tarmac tracks.

We had carefully checked the route using a satellite images and Google maps to ensure the software had not routed us on unmetaled surfaces or "imaginary" paths. The checking paid off and apart from a couple of places where we needed to make a small division the route was excellent.

The next stop with the van was at 43 miles but we did see Lyn and Louise drives past before then. They arrived at Hermes the 25 mile stop just after we set off cycling again.
They had taken the 8:15 saving from Dover and had spent the night in a hotel in Calais.

After a little debate it was decided to have lunch after the last climb of the day. The profile showed it as a climb of 600 feet spread over 4 miles. In practice most of the ascent was done in a couple of steep climbs. We meet the van after 73 miles of cycling in the village of Moisselles.

Another excellent lunch. I had planned the route into Paris to take some minor roads into St Dennis and around the back of the Stade De France. We realised before we set off the the mapping software had routed us some one way roads the wrong way. The last section was navigated using Jame's iPhone. 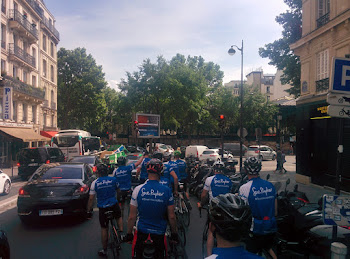 After a few diversions and a little traffic we finally saw the Eiffel tower.

A visit by President Putin meant that half the bridges accross the Seine had been closed to traffic and pedestrians. We crossed on a footbridge and joined Elizabeth,. Tom, Lyn and Louise on the grass behind the Eiffel tower. Photos were taken and a couple of Asian tourists and had a picture take with us on one of the bikes ! 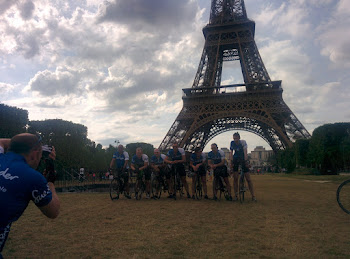 The hotel was a short distance away. The cyclists cycled arriving in time for a refreshing beer before the van arrived with the luggage. We had strugled to find a car park in Paris that we could put the van in overnight becouse of its height and length. We eventually located one about a "20 minute" drive away. When Tom arrived we found a space outside the hotel with unrestricted parking from 20:00 to 09:00. 2 euros paid for the extra 30 minutes we required.

Lyn and Louise took longer to get to the hotel. At 19:13 the sat nav showed them 11 minutes away but the were traveling at 2 miles per hour. Plenty of time for a second beer. They eventually arrived just before 20:00. After a quick shower we went out for a meal in a restaurant round the corner from the hotel with the rest of the group. A good end to an excellent trip.

A pleasant meal sitting out side in the centre of Amien followed by a rehydrating beer. 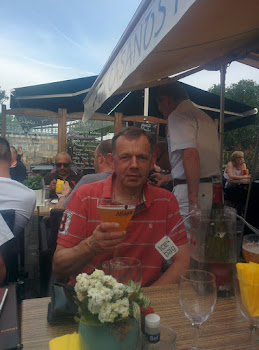 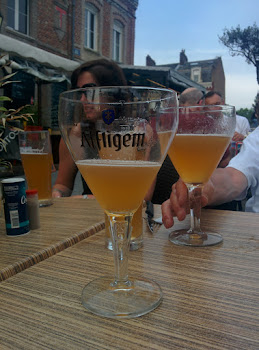 
In the end Medway hospital washed their hands of Nick. Lyn and Louise drove him to Peterborough hospital. The consultant did not think an operation was necessary so Lyn and Louise drove him home before driving back to Dover. They changed the booking to the 20:15 ferry and booked a hotel a 15 minute drive from the port. They will join us on the ride today.The forecast today is hot over 28 degrees and it another 90 plus miles to Paris.

Posted by BrextonT at 05:53 No comments:

We finally made it to Amiens after 94 miles of cycling. The day started with breakfast at 7;00 and we were away by 8;20 once we had helped Tom turn the van round in the car park. It was blocked in by a couple of cars.

The key to the bike store must have turned up becouse it was on this morning. The previous evening all the bikes apart from mine had been put in the the store and the door locked.When I tried to put mine in the manager could not find the key!

The day had the by now customary assortment of punchers. The is not comprehensive. Malcolm had to change a front and rear tube at different times. Danny continues to struggle with his tubless rear tyre. The latex is not sealing the hole and he is continually losing pressure
The tyre has been glued to the rim and we are worried if we try and take it off to fit a tube we may damage it beyond repair. We cannot swap the wheel as it had a different fixing system to the spares we have with us.

We left Calais via a velo vert which had too much small gravel in places. We had one minor diversion from the route. The roads though a village were closed for a military parade. We found an alternative route the appeared to be a mile shorter but it turned into an unmade track do we had to retraced out steps.


We meet the van after 20 mile's of cycling and again after 58 miles. Martin had suffered a front tyre puncher
I stayed with him but it took a while to fix. We were pushing hard to catch up and really needed some food. Tom and Elizabeth excelled with one of the best picnic lunches it have had for a long time. 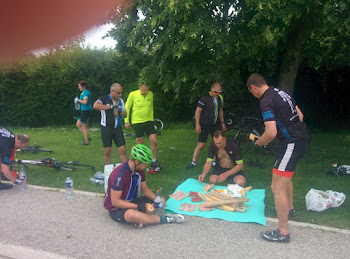 Everyone appreciated the Lunch and we pushed on meeting the van after another 15 miles and again 8 miles from Amiens. A good excuse for a break.

We arrived at the hotel just before 5. La Chamber d Amien is modern clean and comfortable. My room has a much appreciated rain shower.

The hotel is a 30 minute walk from the centre. No more cycling today so Taxis have been ordered for 7:15.

Posted by BrextonT at 18:09 No comments:

An eventful day. A night in the Travelodge
at Strafford meant we were at the Olympic Velodrome for 8:00. Bikes were stored in the room overnight and we were able to park the van and car in the street behind. 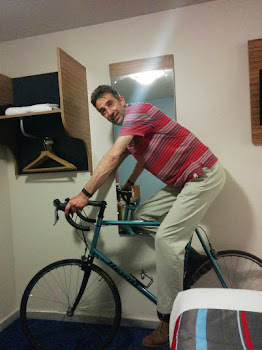 Photos were taken and then we were off. The forecast heavy showers started 3 miles into the ride but soon cleared. The first puncher was a few miles in one of several we suffered during the day.

The Thames was crossed using the foot tunnel. We ignored the no cycling sign and cycled though once we had carried out bikes down the stairs. 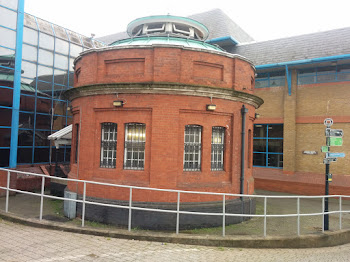 The Medway was crossed at Rochester. We were making reasonable time. When we turned towards the village of Lower Rainham we ignored the road closed signs along will most of the motorists. We found the road totally blocked, A trench had been dug accross the road blacking a 50 yard section and the workmen would not let us take sour bikes though. The land lady of the village pub who was unhappy with the constant steam of cars and now14 cyclists turning round in the pubs car park eventually told us a short diversion we could take. 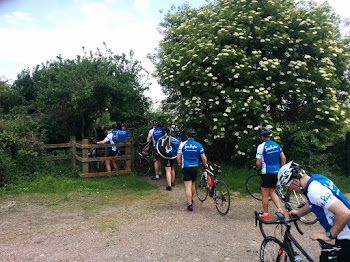 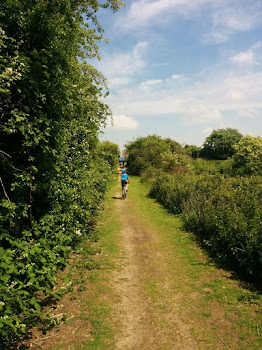 Disaster stuck as we were leaving Sittingbourne. Nick came off his bike and although at first it appeared he was a shocked and grazed it soon became apparent he had broken his collar bone.

The van which was waiting for us 11 miles down the road drove back and Lyn and Louise then drove Nick in the car to the local hospital. The diagnosis was confirmed by x-ray


The cycling continued on after an hour delay. The GPS maps had had to be recreated a few times to suit the various devices we are using and routes varied a little but we all kept together and followed one device. We missed one turning and becouse we were running out of time to get the ferry rode a few miles along the A2. Not recommended but the descent to the port was good and we free wheeled at the speed limit.

Nick's diagnosis was confirmed at the hospital and he is booked information an operation on Sunday. Lyn and Louise eventually found s couple hotel rooms in Rochester and stayed with Nick overnight they hope to join us later today. Although we arrived at the port in time to load the van with the bike and a few passengers and get it on the 6:30 sailing it transpired that foot passengers had to arrive 1 hour before the sailing so we're took late to get it. The next sailing was cancelled so we had to wait until the 8:25 crossing. My bike would not fit in the van so I loaded with the cars. 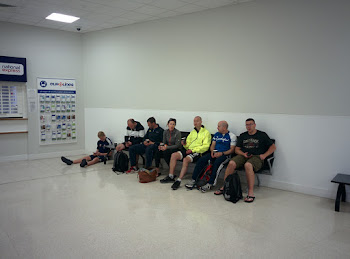 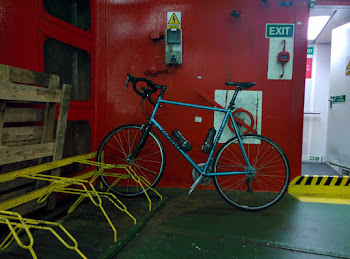 The foot passengers got a taxi the short distance to the hotel and I cycled round on the pavements as my light we in the car.
Let's hope today 90 miles is less eventful. The blog will be updated later at the end of the trip.

Posted by BrextonT at 17:08 No comments: 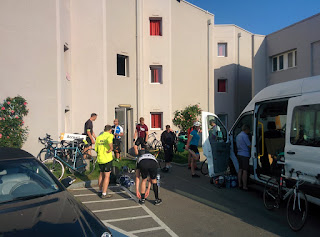 No to be left out! 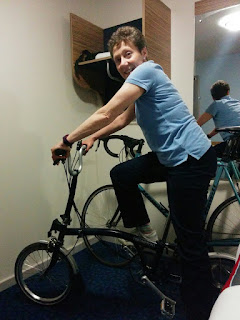 Posted by BrextonT at 23:39 No comments:

A quick spin round the room 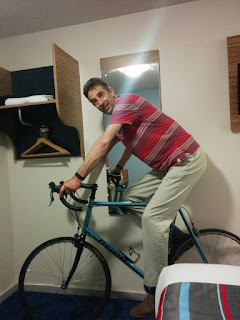 Posted by BrextonT at 23:38 No comments:

Traveling to London tonight ready for a prompt start tomorrow morning The routeis planned so its just the 264 miles 10 000 feet of climbing and the sun we have to contend with. looking forward to the ride.
Posted by BrextonT at 18:35 No comments: