We selected Hotel Acadine becouse of its close proximity to the velo vert that runs from Le Bec Hellion to Evereux . The hotel was a good choice as we could be flexible on our arrival time. it is modern and functional but lacks some of the charm of the other accommodation we have stayed in on this trip

We were in breakfast for 8:00 and cycling by just after 9:00 having obtained an hour extension of the hotels normal midday check out time. We had cycled the velo vert on a couple of previous occasions. This time we selected the direction of Bec Hellion about 22 km from the old station. 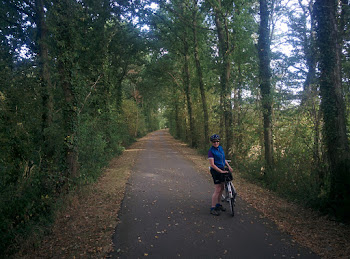 It was surprising cool as we set off. Gilets were put on and the start and once on the ride Lyn stopped to add arm warmers as well. A lot of the path was in trees and in shade and the heat of the sun had not started to warm the air. The ride to Bec Hellion was mainly downhill so the return was a little slower. We were back at the hotel at 11:35 having stopped in the town to buy lunch and fruit for the journey. 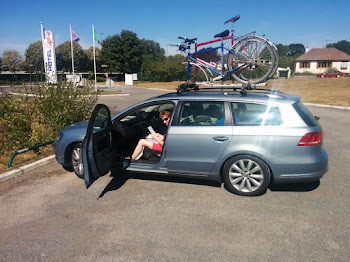 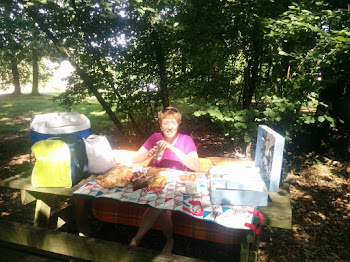 After a much needed shower were started the 3 hour trip to Calais at 12:45.

A Brexton lunch stop broke up the journey and we arrived in Calais without any delay. The 8 euro toll being a pleasant surprise as we expected more of the journey would be on a peage. The plan was to buy beer and petrol from the shops just of junction 3 but we found assess from the motorway to the port blocked.
A bit of excellent piece of human navigation on Lyn part took us round on the minor roads and to the back of the industrial estate.
Beer and some more wine was purchased and whilst Lyn sat guarding the luggage Robert repacked the car. Should we have tried to put in a third box of Budweiser.
We ignored the motorway and drove thought town to the port. We had plenty of time and after a long queue we had made it though the UK boarder controls. 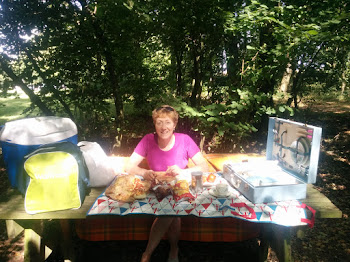 When we reached the PO desk we were told that the ferry was running 30 minutes late. By the time we boarded it was more like an hour. Good job we have a hotel booked for this evening. 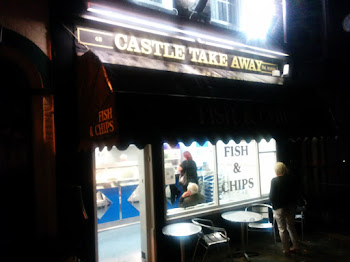 The Castle fish and chip shop on Dover provided our customary supper when we arrive in Dover on a late ferry. The M20 was closed but after we needed to exit for the hotel. Oh we arrived in Dover to the first significant rain we had seen for 2 weeks. A customary welcome to the UK.

We eat in Hotel La Bellerive. It's was English owned and the owner was very friendly. However is is disappointing to note we found the food average and overpriced for the quality.

We had a good night's sleep once we had rearranged 9 pillows and cushions that had be placed on the bed in a attempt to ensure our comfort. After an average breakfast we drove the 7 km to Lac Vassiviere. Lyn had picked of the leaflet on the bike path that circumnavigates the lake on one of our previous trips to France. The Circuit Raymond Poulidor named after a French cyclist is also known as the circuit des legends and boards around the route describe the endeavours of some of the heroes of the tour De France including Poulidor, Miguel Indurain , Bernard Hinult and Greg Lemond. 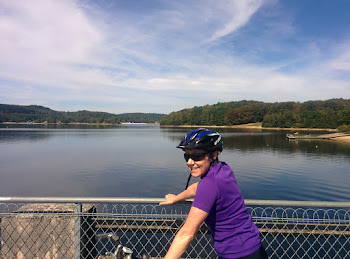 Rather than following the shore the route was on roads found the lake and would have been too billy for Louise. As we were both wearing pants we could not cut down to the shoreline.

We did however divert from the route to go too the island in the middle of the lake. 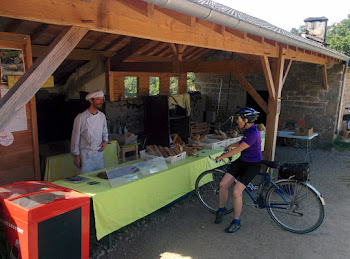 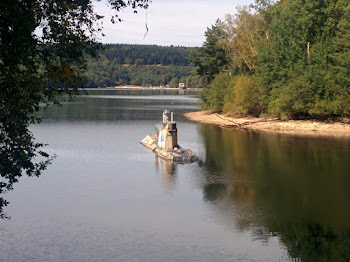 We did not have time to explore the whole of the wood of sculptures but did find sn artisan baker who baked his bread on a wood fired oven. Lunch sorted and a midmorning snack taken with a small coffee overlooking the lake and it's " submarine". Were were back at the car and off on the 6 hour journey to Le Neubourg . Kate stated us off on a a scenic tour of minor twisty roads and our estimated arrival time had extended by 10 minutes in the first 30 minutes of driving. This time was slowly pulled back and a late Brexton lunch taken at a picnic spot. The artesian bread was very good snd well worth the price. Kate excelled in the centre of Chartres when we avoided the ring road and queueing traffic and went on a cut though round the centre. We arrived at hotel Acadine just after 7:30 just in time for a quick shower and to cycle into the town for our evening meal.

Posted by BrextonT at 23:30 No comments:

We left our accomadation on Genos at 10:00. We practiced our best French again saying goodbye and after a trip to the post office we were off. The market in Arreau after 30 minutes of driving was our first stop. 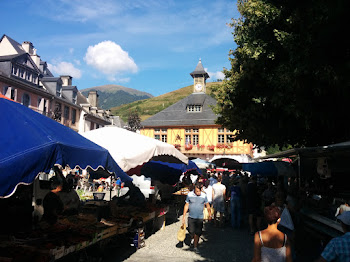 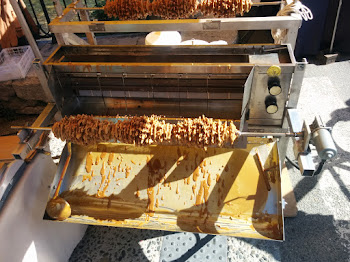 These cakes cooked on a skewer are a delicacy of the region but the taste does not justify the cost. 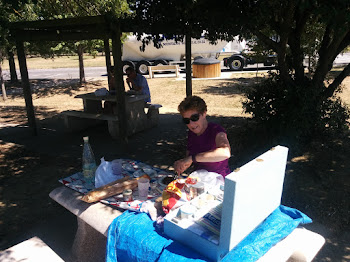 A Brexton lunch was taken north of Toulouse. We stopped later for a Brexton coffee and cake and arrived at our accomadation just after 6:00pm.

The B+B is run by an English couple who served us a welcome pot of earl grey outside in the shade before we unpacked the car.

Posted by BrextonT at 18:36 No comments:

Put me back on my bike

We awoke to sunshine and a clear view of the mountain tops. Robert selected a ride the 19km ascent of Port De Bales and by 10:20 we were in the car for the "40 minute" drive to the start. As we wound our way up the Col De Peyresourde on our way to Baguettes De Luchon it soon became clear that the estimated journey time was very optimistic and we would not have time to do the ride a make it back in time to visit the spa in Genos.

After s little deliberation we turned round and decided to climb the Col De Peyresourde for a second time , this time by bike. 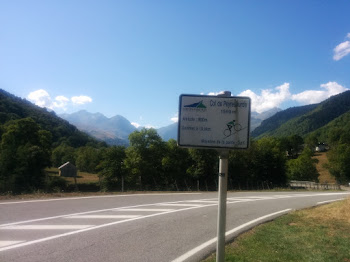 669m of ascent is completely in 9.8km of climbing and even with a slow ascent would allow plenty of time to visit the spa.
The km posts helpfully countdown the distance to the top and give the average gradient for the next Km. After a gentle start the gradient increased to 9% . Most of the climb was at 8℅ with the last couple of km averaging 6℅. 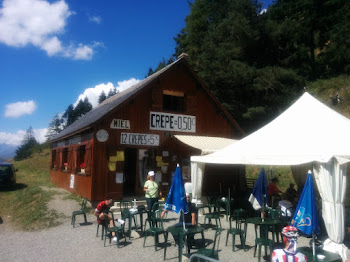 The cafe at the tops offers fresh crapes for 50 cents or 12 for 5 euros and was doing good business from the constant stream of cyclists and other tourists.The menu was limited but we shred and omelette and plate of chips before having a couple of crepes each. The descent back to the car was completed in under 30 minutes including stops for photographs. A one point a few bird of prey circled low above us. They eventually decided better picking could be had elsewhere and moved accross the valley.


The spa "balnea " was excellent. The 15.50 euro admission gave 2 hours in the spa with additional time charged at 4 euro for half an hour. We spent two and a half hours in the spa, lots of different areas. The outside Japanese hot pools were particularly good. You moved though a series of pools that steadily incresed in temperature to 40 degrees centigrade while looks at the surrounding mountains and watching the paradescenders slowly descend .
We returned to the gite for a leftover tea. The sweet potato and peppers we had brought from England providing the base for a vegetable curry . 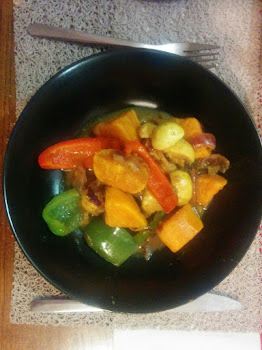 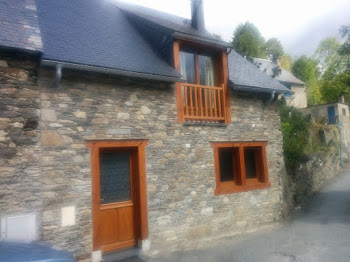 Posted by BrextonT at 09:24 No comments: