47 miles in the dry then it rained. Awoke to clear skys but it had started to cloud over before we set off. Starting in sa Pobla we took the back roads to Inca where once we found the road we continued on to Santa Maria dei Cami. We then did the short climb up to Alaro.The pastelaria in the main square with its excellent chocolate cake was still open. But then shut before we were able to purchase any! Had a ham and cheese Pa amb oli in a small bar off the main square.We continued following minor roads to Lloseta and then Selva. 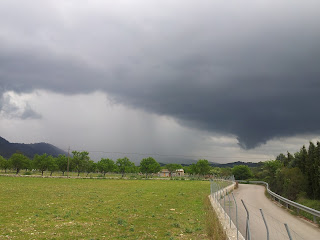 As we approached the village the clouds darkened and before we reached Campanet the roads had become wet. Climbing the hill to Buger the rain started. We made shelter outside a pasteleria before we got too wet. A cake a coffee and 40 minutes later the rain had subsided and thunder and lightening had stopped.The owners "son" had even offered us a lift back to the car if the weather did not improve! It was then a quick dash for the last 3 miles avoiding the puddles to to get back to sa Pobla. We did not get to wet apart from the line of water up our backs caused by the lack of mudguards.
Then it rained. 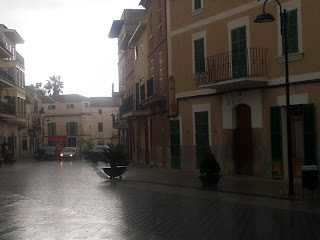