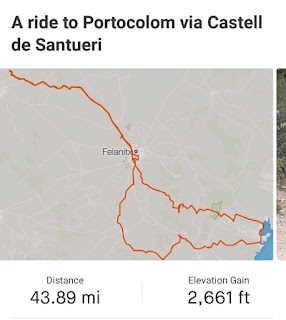 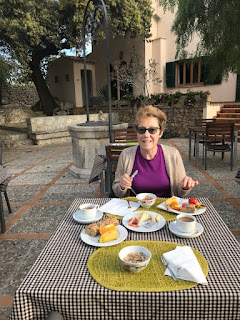 We were first in breakfast again  and choose to eat outside. If we  been in England we would have said it was  too cold although it was pleasant  when the sun came it out. The temperature was a little cooler than the previous day at around 14 degrees so we started riding wearing sleeves. Only the first part of the ride had been planned which was taking the back roads to Felanitx and climbing up to the fortified remains of Castell de Santueri.The road started eith a fairly gentle ascent. A guide to the climb we read the previous evening described the last two  kilometres as averaging 10 percent.  Whilst the average gradient may have been correct it included several section at 16 percent. There were good views on the way up and when we reached the Castell. The 4 euro entrance fee would have been good value if Lyn had been able to walk round and we had brought a lock for the bikes.
Descending from the Castell we found a track heading in the general direction of the coast , The Garmin showed the track joining up with a road.  After a little persuasion Lyn reluctantly decided to follow me down the track but walked a couple of the steep sections. When the slope finally levelled out and the surface became better we followed a mountain bike sign to Portocolom. The signs then disappeared but the Garmin was able to provide directions.We arrived at the port,  lots if expensive boats and a pretty harbour with lots of cafes and restaurants.  We had stayed there in 2001 but I did remember it,
After a shared pizza by the harbour we returned via a minor track to S' Horta  and them on minor roads Cas Concos des Cavaller. We had a tour round Felanitx in a fruitless attempt to find an ice cream parlour before retracing our route back to Porreres arriving back just aftet 18;00. A round trip or 45 miles with around 800m of ascent .  We eat in  Can Feliu and had  an excellent meal with a main of pork wrapped in cabbage leaves. The grappa came out again at the end of the meal and this time we shared a glass.
Posted by BrextonT at 06:36