A leisurely start to the day. Roger went for his scouting run up the canal he was back by 7:00 but did set off at 6:00. We set off in the boat just after 9:00. There were several locks to negotiate. Each lock was manned and fully automated so our only Job was to hold the boat with ropes at the stern and bow to ensure the boat stayed in position in the lock. After the first lock we doubled breasted with a smaller boat and went up the canal together. The sculpture collection at the second lock of the day provided an amusing distraction whilst we waited for the lock to clear. We continued up the canal to Marseillette turning round just before the lock. The side thrusters and shorter length of the boat made turning the boat a lot easier to do than trying to turn a narrow boat. Gerry called Le Boat in the morning. Thet we initially going to send an engineer to look at our cooker in the morning but we had to call then later to give them our exact location. When we did, they we dealing with a major breakdown so send and engineer out in the afternoon instead.

At the fourth lock of the day the rubber bumper strip on the front of the boat came off and one end fell into the water. A swift repair using Roberts Swiss arm knife followed. It had been damaged previously and the screws pulled out. We will get it looked at the base in Homps on Tuesday morning. We told the engineer when he arrived to fix the cooker and it obviously happens all the time but needs to be repaired at the base.

After a pleasant al fresco lunch on deck Gerry, Chris and Louise went for a walk to Marseillette village. They were followed by Roger and when they came back Lyn and Robert cycled to the village and up to the watch tower. The engineer appeared could not fix the cooker at the first attempt but correctly diagnosed the problem and meet us later in the day with a new gas bottle a replacement regulator.

We then continued towards Homps and moored to the night on the jetty at by the first lock you come to away from the town. We sat outside again. A pork all in one stew which we slow cooker on the stove. 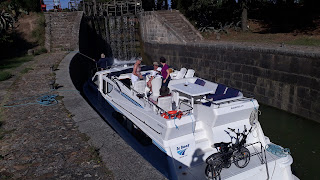 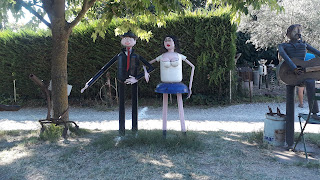 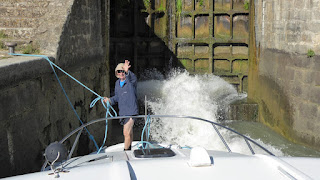 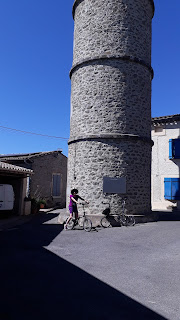 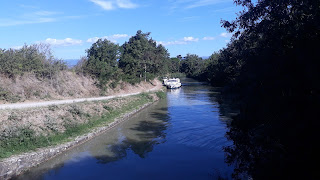 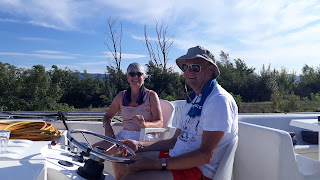 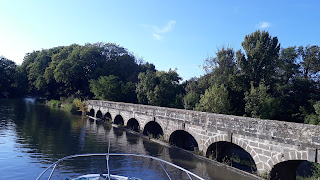