We had moored for the night by the lock and went though it as soon as it opened at 9:00. It was then a short cruise to the base at Homps. Chris did an excellent job reversing into a space. We hooked up the electric and connected the hose pipe to fill up with water. Gerry and I went to the office. Despite showing the engineer yesterday they were not expecting us. The lady completed a fault report sheet but could not say how long we would have to wait. Jobs were divided, Roger, Chris and Gerry went off at the supermarket, Robert and Lyn went off to check restaurants so we could book something for the last night and Louise stayed on the boat to wait for the engineer. Restaurants were checked out and a local cooperative visited for some bottles of wine.  If they are good, we will get some more when we return to Homps. We arrived back at the boat just as the engineer was arriving and explained the problem to him. Robert left him doing the repair whilst he used the car to collect the shopping from the supermarket and drive it back to the boat. By the time he returned the boat had gone but was quickly located and the shopping transferred.

The rubber was secured and we left the marina just after 11:15 making it to the first lock before it shut for lunch at 12:00. We were the third boat into the lock and once we were through, we followed them down the canal to the next lock. We tied up and had a pleasant lunch sitting under the canopy whilst we waited for the lock to open. We then went as a convoy together to the next lock. The gates were closed so we moored up. They had been doing some improvement works to the banking and had fenced off sections making it more difficult to find a place to tie up.

We waited for the lock to open and the lock keeper appeared to be having an extended lunch. Two large boats appeared behind and when the gates finally opened, we discovered the French queuing system is different.  The large boats have priority and went into the lock first, one at a time. We ignored the wave from the “hotel” guests sitting on the stern as the boat cruised past.  It was two hours after we arrived that we finally cleared the lock. Ice-creams were purchased as we went past the lock keeper’s house. They were put in the freezer and eaten when we cleared the locks.

There was no delay at the next lock.  We are now on a 54km lock free stretch all the way to Beziers. We moored for the night at the pretty village of Le Somail. A popular spot with boaters. We did not eat out in one of the many restaurants and instead Chef Chris cooked up a paella which was served on the top deck. The local wine that Lyn and Robert bought, was sampled. Both bottles were very good and we will get some more when we return to Homps.

The temperature was hot above 30 degrees in the shade and a lot hotter when sitting in full sun. 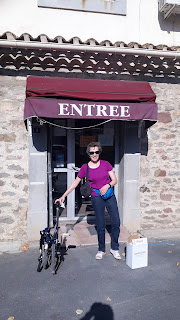 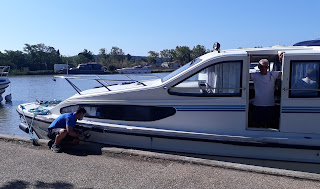 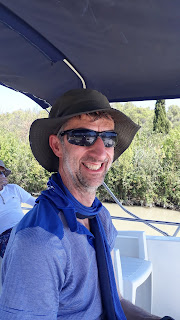 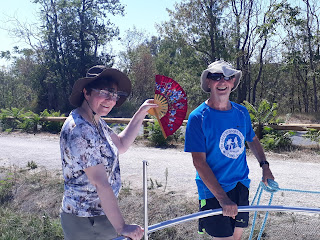 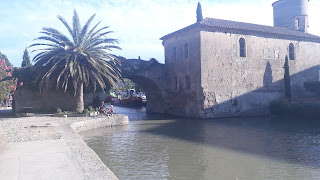 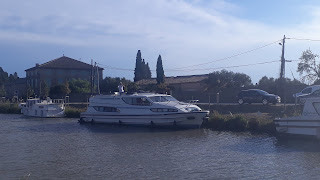