The boat handbook for the times to get back to the marina from Ellesmere were a little optimistic with the journey taking around 1 hour and 45 minutes instead of the hour and a half the book suggested. We had moored on the far side of the town setting off at just after 8:00 so were still back in time. It was another day of good weather and a pity that we had to return the boat. We were met by Alan at the marina. There was no hurry, another hire boat was moved so we could moor our boat directly against the side.  Robert loaded the car whilst Lyn finished the washing up. With the boat emptied and checked we set off. We had not planned where to go for a morning coffee but the kitchen@thecastle at Whittinham was an excellent find. It was another tea shop frequented by cyclists on their morning ride. We were too early for the lunch menu but a bacon barm was a welcome treat.

As the day was so nice we decided to visit Barbridge junction and the flight of locks we did not make it to on the boat. We parked in Barbridge just down from the Barbridge Inn, frequented by many Youtube narrowboaters, and cycled up the tow path to the locks. It was about 1.25miles to the top of the flight. The main path alongside the canal was a little muddy in places with the Brompton not being the ideal off road bike. The path by the locks was gravelled. We went a short distance beyond the top of the lock but the condition of the towpath changed back to muddy grass so we retraced our steps . Photos were taken and we just got in front of a large group of walkers when we returned to the main canal. Returning to Barbridge we went a short way up the Shropshire Union canal until the towpath changed back to muddy grass. We then retraced our steps to the car.

On driving to Barbridge we passed Snugburys Ice Cream parlour quite close to the top of the locks so decided to drive there for a cup of tea and ice-cream . The parlour turned out to was very popular . The website says they get 300 000 visitors a year and the good weather meant the car park was nearly full and there was a long queue of customers waiting to purchase an ice-cream. The queue was too long to wait so rather than queue we decided to start the journey back and find a teashop on the way. Google maps suggested Ginger and Pickles in Tarporley.  A hidden gem in the heart of Cheshire. We were able to park outside. There is a teashop on one side  of the road and a small bakery on the other. The teashop was full but there were a couple of seats outside the bakery. They had officially finished serving hot food but said that the hotpot was still available. It was one of the best hotpots I have eaten. Tasty with large chucks on meat, a real delight .  The late lunch meant we did  not need dinner when we got back.

A cake was also purchased but we saved that for later.  The journey back was uneventful . The finish of a good week on the canal . 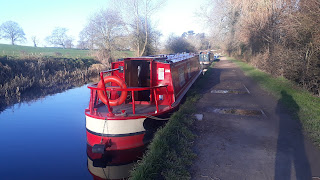 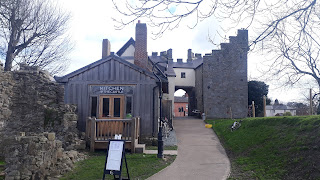 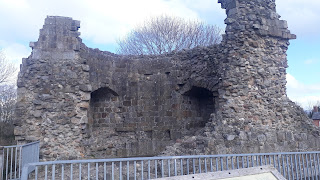 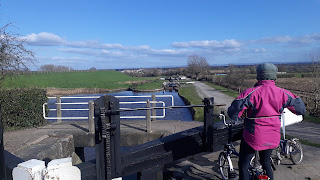 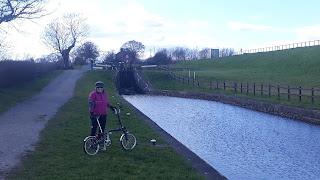 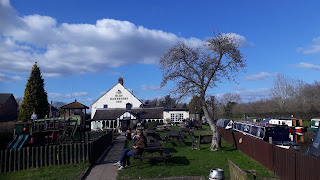 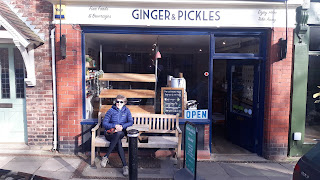