A second ride from Biniali 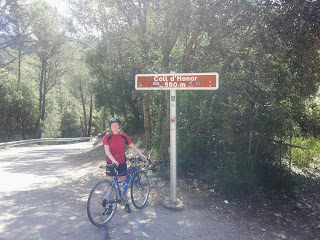 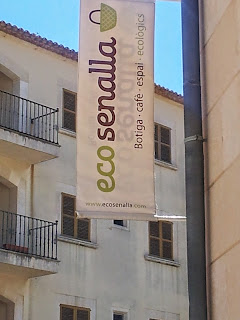 Tuesday -A second ride from Biniali.

This time we followed the water road to Sant a Maria and continued onto Bunyola. There we turned off towards the Orient.The ride  has some stunning scenery and is highly recommended. The start is the climb off the Coll de Honor to the  Orient, 5.4 km at an average of 5.9 % rising to a height of 550 metres. The bar in the Orient was poor value last year so we continued to Alaro for lunch. After a small climb out of the Orient it was a fast descent to Alaro with some long sweeping bends. When we arrived in the village square the bakers was still open. We had been caught out in previous years when he closed  before we had bought anything. Chocolate cake was purchased and stored for later. 5 minutes later the baker closed the door and shut for lunch.  We selected a cafe just off the main square for lunch. It turned out to be vegetarian. Desipte having a board outside that offered a range of snacks the only food that was available was the 10 euro 3  course lunch.  This was more than we wanted but he was happy for us to share. The food was excellent. A filling bread and garlic soup to start, a soya boulanse for the main course and s pear tart for desert. The tart was more like a claflouti in texture. It was not  too sweet and had a good taste. We will look up a recipe when we get back.
We returned to Biniali via Inca. Once we had negotiated the town we took the minor roads to Sencelles and continued onto Santa Eugenia before returning to Biniali. We felt 3 drops of rain as we cycled the last few miles. A round trip of 48 miles.