A trip down the Dorgogne

After a good night’s sleep it was breakfast at 8:30. We had decided against paying the extra for a for a cooked breakfast with cheese and ham so were given a warm croissant, warn baguette fruit and yoghurt. A good start to the day. We had decided to do a canoe trip down the Dordogne from Souillac. Michel called the canoe company and they said we had and option of starting at 9:30 or 11:30. We opted for the later time. We drove to Souillac and located the canoe company arriving at 10:20 and tried to book a for later. We were told to come back at 11:10. We had time for a quick walk into the town and located a Lidl where we purchase some cheese tops rolls for lunch. We arrived back at the base at 11:10 to be at the end of a very log queue. We finally paid and selected the 28 km trip from Copeyne. The organisation of the buses can best be described by the rearranging the words of “brewery , p**** and organise”. A large group of people we finally reduced to 5 and after a lot of waiting a mini bus for our start point finally arrived at took on the 35 minute drive to Copeyne. We were the only 2 passengers left on the mini bus by the time it arrived the other having been dropped off at the previous drop off point. Most of the other people had opted for the shorter trips and perhaps we going to take advantage of the free entry into the water park canoe ticket also gave us. By 1:20 pm we were on the water and enjoyed a long paddle down the river arriving back in Souillac just after 6:00. We had time for a couple of short stops but had not been given a detailed map so it was difficult to gauge our progress. The Dordogne was gently flowing with there were several selections were the river had cut into the cliffs alongside the river bank. We had dinner again at the Terre 2 Princes and were joined this evening by French lady and her young son. A leisurely 5 courses dinner again. The weather was warmer than last night so we sit outside and had the view of the sun going. Whilst we enjoyed melon and parma ham, turkey in a red wine and mushroom sauce, cheese and fresh raspberrys with fromage blanc. 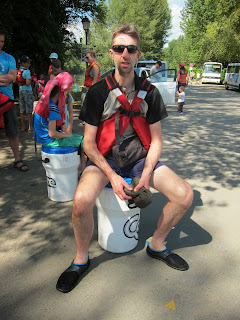 Waiting for the bus. 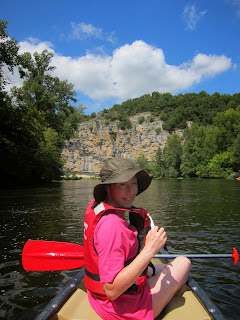 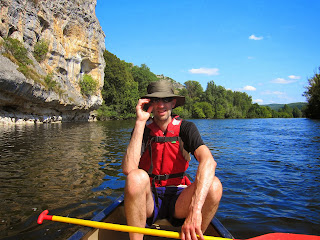 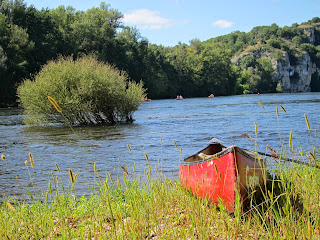