Standard breakfast but a little disappointing for the price. Drove to La Malene to canoe down the Gorge Du Tarn. We check the time this would take the night before and although it is only a short distance the driving time was around 1 hour 2o minutes as you had to climb and then descend two passes. We had considered trying to find an alternative hotel but decided to stay as we had booked info two nights. Hired a canoe again from the company we had used 2 years ago.The moulin de la Malène We opted to do the 20km descent again from Saint Chély du Tarn to Pas de Soucy 46 euros for both of us. You are taken upstream to start the descent. The first 9km take over have the time as you have to paddle most of the way. The second 11km is thought the prettist part of the gorge and tends to be more popular. The number of kayaks was well down on the numbers we had seen 2 years previously. We not sure why it could have been the Metro forecast which turned out to be as accurate as the BBC with the forecast rain being replaced by sun.
We with a short trip upstream to view the waterfall and then continued around the bend to the start of the rapids. By the time we started going in the correct direction it was 11:50. The were only 5t of us on the 20km and the other group had long gone. The total trip with stops for lunch swimming and photos took about 6 and a half hours. We got the the finish at 6:40pm 20 minutes before the last bus back. We were disappointed to find that bus that sold photos of the trip had long gone. We had even had taken our hats and glasses off to look our best. Decided to eat in La Malene as we could not have got back to the hotel in time for dinner. Had an 13 euro “Chefs Salad” and lasangne 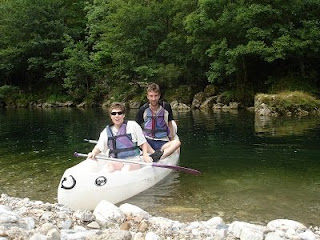 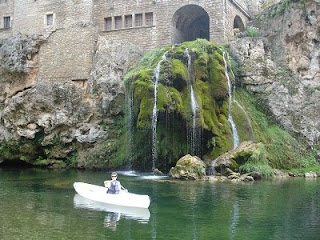 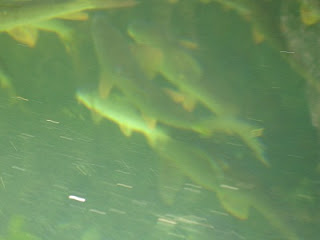