We said goodbye to Martin and Sue, whilst they headed for the airport we drove to Llubi. The plan was to take a round about route to Biniamar and to have a late lunch in Bar Mayorga and return to Llubi after a coffee and cake in Muro.

We parked on the outskirts of the town and took some minor roads and tracks towards the Cami Vell Muro. 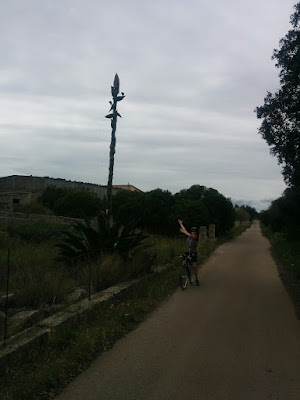 Lyn stopped admired the cactus . We took an unpaved roads past a couple of farms.
Fortunately the dogs were chained up and the chains abruptly stopped their charge. We eventually reached the MA3240. We found the track marked on the map but it was gated so we had a mile to cycle on the main road before turning off on the Cami Vell Muro. We followed this retracing a couple of our earlier rides and turning off towsrds Binnissalum. 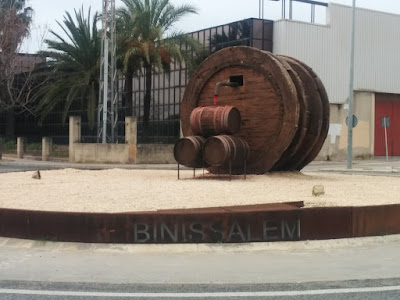 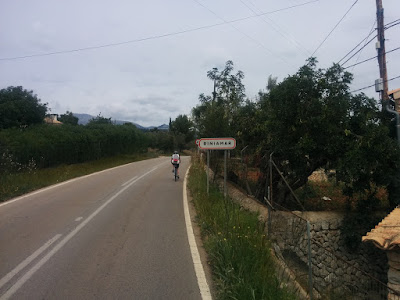 We spotted Agi and Bob enjoying a late lunch and they invited us to share their table. We meet them at the same bar earlier in the holiday, Bob is Scotish and his wife German.Lyn an I shared the very tasty 3 course menu of the day, Pasta with meat and fish to start followed by a skate wing with tumbet and a lemon mouse for desert. The bill including 2 beers and 2 coffees was 12 euros. After a relaxed lunch we said goodbye to Agi and Bob. The plan was to ride to Sa Pobla via Moscari. When I stopped to look at the map they passed us and Bob shouted he would show us a better route. The sky darkened as we followed them to on the minor roads to Campanet and the clouds look like a small tornado had formed. 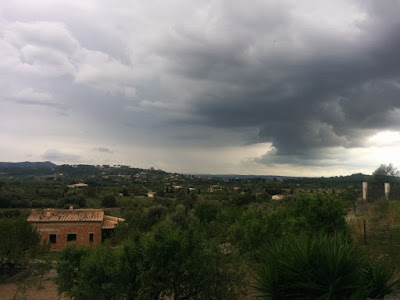 Bob invited us back to view their villa as it was only a few hundred yards off our route. It is located just behind the small chapel Sant Miguel where we often stop we cycling the back roads to Campanet After a brief tour of their very comfortable villa the rain started and then intensified. We sheltered outside then Bob offered to drive us back to Llubi. We had a choice of getting very wet or accepting his kind offer so opted for the second option. The ride was cut short at 24 miles. Lyn stayed with Agi whilst Bob and I fetched the van. We drove past some very wet cyclists. Thanks for the lift it stopped us from getting very wet. They are returning to Germany tomorrow so we will not see them again this holiday but they have already booked for next year so maybe will will see them then.

We stopped a Lidl on the way back to the apartment to play with the bread slicing machine. We arrived back at 6:30, ready to start Martin's 7 beer challenge.


Turning on the TV to check the weather forecast we saw the tornado featured on the local news.