After a good night's sleep we awoke to a blue sky. The first job of the morning was to reassemble the bikes. The quick ride to the local supermarket and we had a couple of rolls for breakfast. 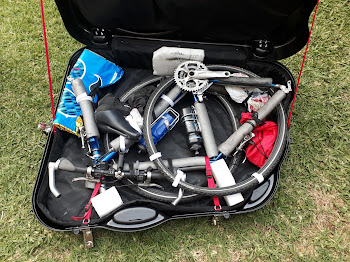 Lyn had done some research before we came and had discovered a local wine fare was taking place in Pollenca. It was only open between 10:00 and 14:00 do a trip to Lidl was posponed and we cycled to Polleca instead. After s little difficulty finding the Claustre De Sant Domimgo and having to resort to google maps we were soon paying our 12 euro per person. That gave us a wine glass, pen, a 4 euro discount off any bottle of wine purchased , and a booklet describing the 39 producers who were present each with good selection of wine to sample. A conversation with a couple from Warrington lead to a recommendation of a red to try. 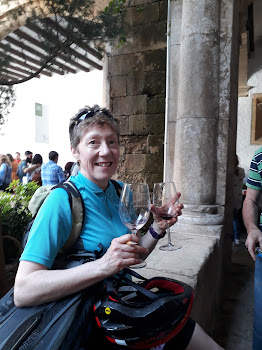 We then worked our way round a selection of the stalls. Time was called just after 2:00pm by which time we were carrying the 4 bottles of wine we had purchased.As all we had eatern was a small breakfast and not had any lunch we headed to the main square for a peella and coffee. We took the more direct route on the back roads back to our accommodation and made a small detour past the accommodation we used to stay in. The flat looked the same but the small villa at the end of the garden had been knocked down and was being replaced by a new block of flats.

The front had also changed. The road is now only one way and a dedicated cycle lane had been built alongside the footpath. We checked the menu at Stay before returning to the villa for a cup of tea.
We had arranged to see Maria at 7:00pm to pay the balance of the accommodation and had time for a short ride before she was due to arrive. We planned to take the back roads to Alcudia and return via the sea front. Going we turned too soon and ended up at the front so took a minor track to get back on course. 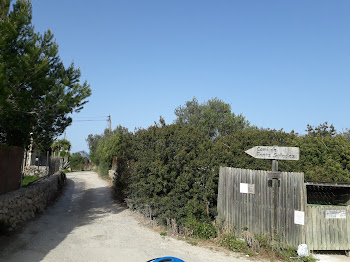 When we reached Alcudia we turned towards Port de Pollenca and joined a steady stream of cyclists going round the bay. Progress was slowed by a head wind but we arrived back at the accommodation in time.

A trip to the Eroski was made to get provisions for tea. Lyn waited outside with the bikes to save her legs but soon had the unwanted attention of insects that bite. Even her ritual dancing could not keep them all at bay.
The Eroski had had a facelift and now offers a wider selection of freshly baked bread and fresh sushi.The later was very tasty as Robert had time to same it unaware of Lyns peril. We turned to the apartment to prepare a fresh salad for tea. 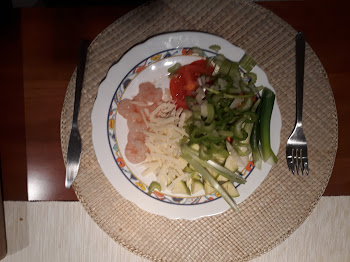