A late start today. We were late to bed as Martin and Sue did not arrive until 23:35 and thst combined with a poor forecast for the morning meant we had a leasurely start to the day and did not
we did not leave the apartment until after midday. There were a few spots of rain on our way to Sa Pobla
but these had stopped by the time we reached our usual parking spot. There was however a strong easterly wind that made the ride out of Sa Pobla hard going.We decided to ride to Llubi for a late lunch and started by taking yesterdays route to the path alongside the railway line. This time we turned off before the end of the track onto Cami des Rotes de Son Ramon. The path was not marked on the Garmin . We had to retrace our steps after one way was blocked by a gate but eventually arrived at Llubi. It was a short steep climb up to the village . We selected a bar in the main square for lunch, cafe s'acusticafe. Robert had another Pa lamb oil and Lyn a goats cheese salad. After lunch we continued to along another mountain bike track to the train station at Estacio d Enllac. It was difficult to tell from the map were the exact crossing point across the tracks eee and we ended up taking the subway under the platform to find there was not way then to exit the station. We retraced our steps few hundred metres to the right crossing point and continued on the minor tracks to the outskirts of Inca. We returned to Sa Pobla on the water road pushed along by the strong tail wind. Robert recorded a speed of of 30 mph on the flat coming into Sa Pobla. A round trip of about 25 miles with some quite bumpy off-road sections. For the second day running Robert did not restart his Garmin after lunch do missed recording a section of the ride.

We returned to the apartment at 6:15 just after Martin and Sue had returned from their walk. After a refreshing pot of tea the evening meal of lemon chicken was prepared. When ready this was washed down with a bottle of wine we purchased from the wine fair the previous week .A dessert of lemon bananas was fabricated from the ingredients we had to hand. We finished the evening playing cards with Martin. Blogs were updated before we returned to bed. A fine day is forecast for tomorrow so will have another ride this time with Martin. 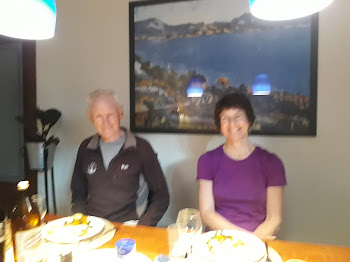