It did not matter which forecast we checked the probability of rain in Puerto Pollenca ranged from 90 to 100 percent probability. The dark sky's we saw when we looked out of the window confirmed the forecast. After a trip to Lidl we had a plan. The forecast was improving in the afternoon so we would drive to Costitix with Martin and Sue, look at the flower festival and have lunch together. Martin and Sue set off first and we followed a few minutes later with the bikes in the van. A long queue of traffic on the road to Costitx made me realise I would not be able to get to my usual parking spot and as I was reluctant to take the van somewhere I might get it stuck I made the decision to turn around. We called Martin and Sue , they were in the long queue so we decided to drive round to Lloret de Vista Alegre, park and cycle the 3 miles to Costitix. The update from Martin was not good. They had parked but the fate was too busy to get around with bikes. Lyn and I decided on lunch in Lloret.The bike were unpacked and The Garmin started then stopped after 400 yards. The two bars on the outskirts of the village were empty but Cafe Restaurant Ca'n Putxet in the centre was full of locals. Most enjoying a set menu. We opted to share a vegetable salad baguette ( it included eggs and tuna) and a slice of cake. We emerged from the bar to spots of rain. It lasted for a few minutes but not long or hard enough to get wet. The ride took us on the minor tracks to Sineu then to Llubi retracing the reverse of a route we had taken on one of our earlier rides. Ignoring a no thought road sign meant we came to yet another railway line we could not cross and that was not shown on the Garmin. We retraced our steps and were soon on the right path the other side of the line.

From Llubi it was tracks again to Costitix . The sky's darkened but although the temperature dropped the rain stayed away. It was almost cold enough to wear gloves.

The Garmin identified some minor tracks that meant we could avoid a mile on the main road.When we got to Llubi the flower festival was still taking place but the number of people had thinned so we were able to cycle round the town and see some of the displays. The sun came out and the temoerature increased. Photos were taken and cherries purchased for desert. We returned to the van via the minor paths to Ruberts. A 20.8 mile trip with 357 metres of ascent.

For the evening meal we had fresh asparagus for a starter, followed by pork tenderloin with garlic and served with tumbert. A Mallorcan dish made with layers of courgettes, tomatoes, aubergine, red peppers and potatoes and baked in the oven. We followed the traditional Hairy Bikers recipe. 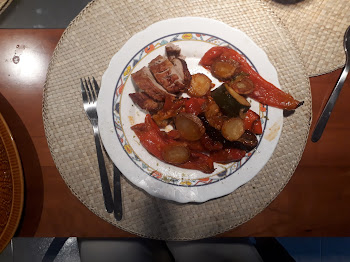 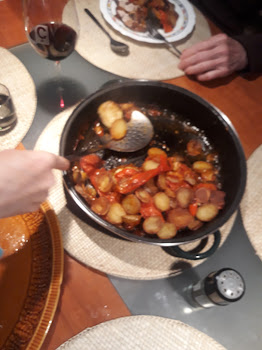 Desert was fresh cherries served with Belgium chocolate ice cream and dark chocolate wafers.
After an excellent feast the cards came out and Roberts run of luck continued for a second evening.