We woke to stair rods of rain. We had left the washing out outside undercover, if it had been 6 inches further out i would have been wetter than when we started. After breakfast the rain eased enough to pack the van. We tidied the apartment took a group photo and Martin and Sue left to spend the day in Soller before going to get their evenning flight .

We decided to drive to Llorenc des Cardassar. We drove via Alcudia and C'an Picafort . Normally you would be slowed down by large groups of cyclists but apart from one or two hardy souls the rain has kept them away.
First stop was the post office, closed at weekends, and then we went to the bakery for panade and a coffee. The rain had stopped and the forecast for the afternoon was for sun later with only a alight chance of rain so we decided to cycle along the old railway to Arta .We parked at the old railway station. Bikes were prepared, suncream applied, weather forecast checked again, waterproofs not required as it was going to be fine all afternoon.We were ready to set off and then the rain started. We sat back in the van and by the time Lyn had finished a chapter of her book the rain had stopped. 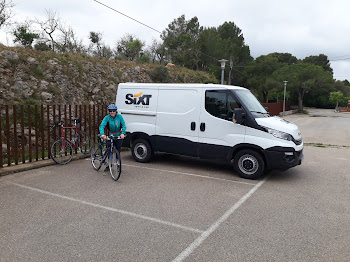 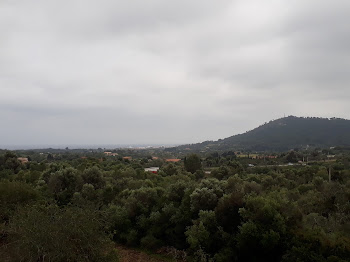 View over to the sea

Lyn found the ride to Arta hard going. The track was stoney and climbed around 140 metres over 13 miles and we did have a head wind. It was only when we got to Arta she found the rear brake had been sticking on. 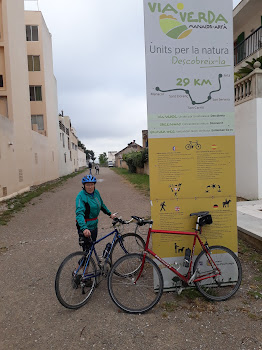 With the problem sorted we returned to the van at a faster speed and the sun came out before we got back. 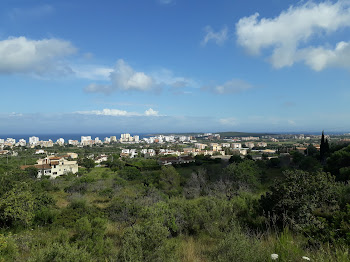 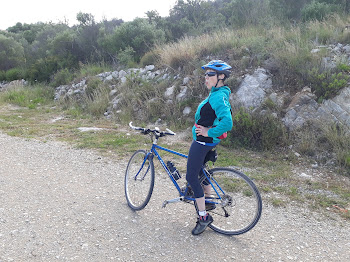 It was around a 30 minute drive to Can Feliu. We are staying in B+B / hotel located in a Bogea about 2 km from Porreres. We had taken the old fashion precaution of printing of a map before
we came so locating it was not a problem. What we had not considered was negotiating the narrow single track road with our large van. Fortunately we only met one car. We were warmly welcomed on arrival and shown our first floor room with a terrace that looks out over the vineyard and to the hills beyond. We were too late to have the evening meal so drove into Porreres. We park on the outskirts of town and Lyn cycled to the centre. We eat in S' Centro an Italian type restaurant located in an an old theatre. We arrived around 8:30 and got a table as we were early for Spain. The restaurant soon filled with locals, with the large floor area allowing the seating to be rearranged to suit the various size parties thst arrived. 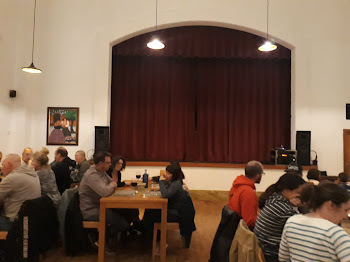 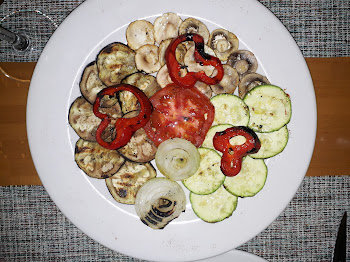 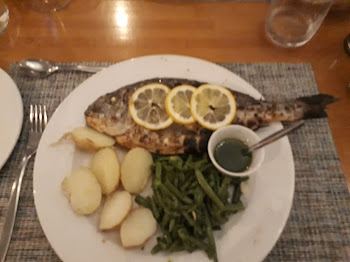 We shared a plate of mixed vegetables and we both had fish for the main course, Lyn salmon and Robert Sea Bream. We chose creme catalan and a fig cheese cake for desert which we shared. It was acceptable but we would not order it again.

The narrow road back to the bogega was successfully negotiated and we sampled complememtary
the bottle of wine we had been left before retiring to bed.