With a fine day forecast we decided to do a ride we last did with Martin in 2016. He joined again today. The bikes were packed in the back of the van and
we drove to Mancor about an hours drive sway. We parked on an industrial estate on the edge of the town. We had parked there in previous years without a problem but this time it was more difficult to find a space to park. A space was eventually found, bikes resembled, sunscreen applied and after a short section alongside a busy road we were on the minor road of the MA 3331. We turned off and retraced our steps of a previous ride towards Sant Llorenc des Cardassar. The farm dog along the track was waiting for Lyn again and having ignored and on coming cyclist and myself and Martin greeted her will a couple of barks. Then turned round and ran thought to the entrance on the other side of the farm. The gate was shut so the chase was over and we continued safely in our way. We diverted from the previous route when we turned off towards Arta. It was a steady climb past Puig de Calicant but the road is not too steep and the climbs short. The roads had been resurfaced since our last visit so we did not have to avoid the potholes as we assended. The road is a hidden gem with very few cars, only tbe occasional cyclist and good views. After the last climb its a fast descent to Arta.

Having located the centre we eat in the French Parisian cafe in first tried 2 years ago sitting in the outside court yard at the same table. After lunch we took the Via Verda (old railway line) that has been graveled and runs for 29 km back to Manacor. It provides some excellent views as it winds it way round .One section runs inland parallel to the coast and offers views down to resorts below.

We diverted off the track at Sant Llorenc des Cardassar and after a short climb we enjoyed an ice cream in a bar in the main square. Returning to the track it was 9 km back to the van. As we had done the ride previously the map stayed packed away for most of the day. The Garmin was only used to help with navigation out of Arta and to get back to the van in Manacor. A round trip of 37 miles with 1677 feet of ascent.

We dined on the apartment
Melon and Palma ham to start followed by fresh trout on a bed of onions and fennel. 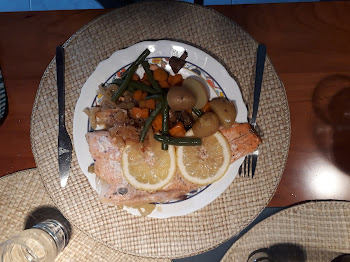 The cards came out again and normal was restored with Martin demonstrating his mastery of Black Maria.