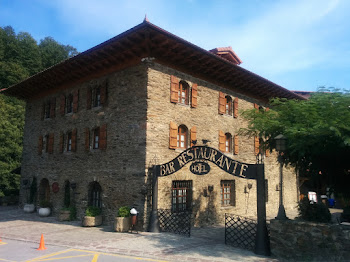 We booked a table in the restaurant to eat and opted for the12 euro menu that included a bottle of wine between us and water. The dishes were filling but not the best quality. My starter was boiled rice with a fried egg on top surrounded by a tomato sauce!

The buffet breakfast this morning was an improvement. Lots of choice , plenty of sweet options but also fresh fruit and decent baguettes and homemade tortilla's.

The ride on the Via Verde follows the course of the old railway. The path runs by the river across from the hotel but to get to it we had to cycle for a mile along the old main road.

The track was a mixture of concrete. tarmac and stone sections. It also included a couple of tunnels. Lights were required for one as as section of the internal lights has failed. 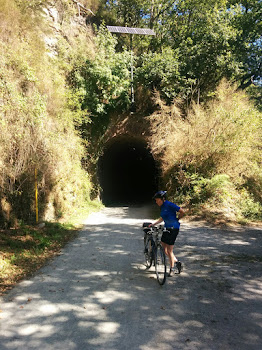 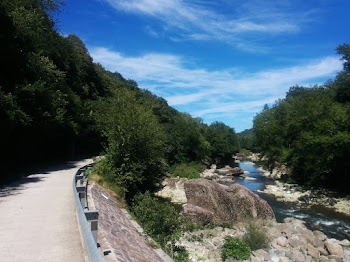 We went a short distance beyond the town of Legasa before turning round
and finding a baker's in the town for lunch. The ride back was mainly down hill slowed by more frequent photo stops. We past the bridge where we joined the track and continued for another 5 miles to Bera. The increased heat had reduced the number of cyclists and walkers. A bar in the town insured we were well hydrated for the 5 mile up hill return to the hotel.

We have booked in at the restaurant again but will be trying a different starter.

The wine was drinkable.