A drive though Switzerland

The car was packed and the appartment cleaned. The cycled around the village and up to the church. We had planned to set off just after 11:00 after a coffee and a snack in the cafe. Cafe Schlossplatz was a popular location with lots of the locals sitting outside and enjoying their breakfast
It turned out they offered a comprehensive buffet breakfast for 15 euros with homemade bread , cold meats cheese,fish and a range of homemade salads. 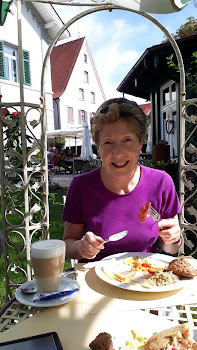 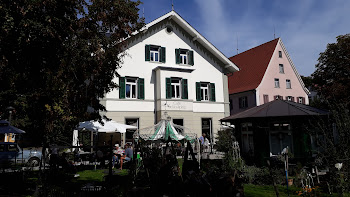 It was an unexpected treat and we enjoyed a pleasant hour sat outside.


The quickest route to Annecy was though Austria around the eastern end of lake Constance. However a vignette would have been required for the short section of Austrian motorway or the motorway avoided. We opted to travel round the western end of the lake .
The route took us on minor roads before we joined the main trunk road. We diverted though Singen for fuel and were pleased to find it was 10 cents a litre less than around lake Constance.

A vignette was purchased for the car at the Swiss boarder .(40 Swiss francs , about £32). Kate diverted us around one accident and we had a short delay when traffic slowed for a second.

A couple of Brexton stops were taken on route. 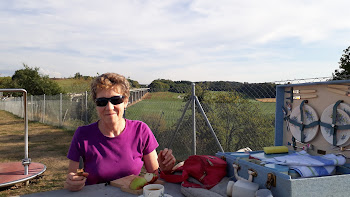 Were arrived at the flat at 7:15. The lock box was opened and keys retrieved. The car park barrier was opened and we finally realised there was a separate tag that opened the front door to the apartment block.

The apartment his small but is what we were expecting.its on the first floor and does have a balcony where you can sit an eat.

We decided on a takeaway pizza for tea. After a a bit searching on Google we found a suitable restaurant about a 5 minute drive away. Unfortunately they was nowhere suitable to parked to we drove back to another takeaway we had passed. We were served by a tattooed lady in a shop filled with an interesting collection of Star wars memorabilia. The pizzas were cooked in a wood fired oven.The artisan pizza had an inch thick base and we opted to share a slice. 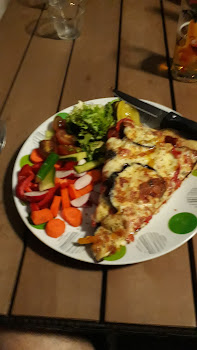 We drove back to the appartment and eat the pizza with a freshly prepared salad.