A drive to Longeville en Barrois

We awoke to light rain and low cloud. Breakfast was taken on the balcony. Thursday was definitely a better day for cycling. The car was packed, flat tidied and keys posted in the box. We ignored Kate's initial suggestion an opted to drive across country to join the peage after Frangy. Various options for the route had been considered including driving though Switzerland but the peage was least 2 hours faster. The toll cost was 29 euros. A Brexton lunch was taken on route. I was disappointed to find the service area had been renamed from Bois de Villars Robert. The tables were located in a sunny spot away from the traffic. 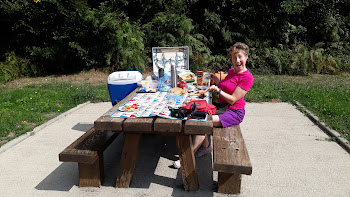 We left the peage with around 100km of driving to go. The route initially followed the Marne valley with its river and long distance cycle path by the canal. Something for s future trip. We arrived at Hotel Bellevue just after 5:00pm . Lyn's french had been understood and we had a reservation for 2 nights including demi pension on the first night.