Tuesday 22nd a ride round the lake

Another fine forecast so we decided to to cycle a circuit of the lake. We started along the Eastern shore. The majority of the route round the East side was either on cycle paths or minor roads.


There was only one section of a few km where we had to join the road.

It had good views of the lake and mountains and the path was closer to the shore than the route on the old railway line . There was one short hill which was a bit of s surprise for s circuit round a lake. 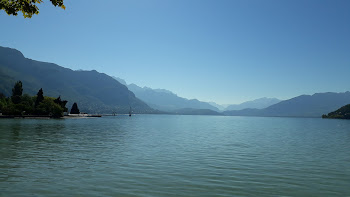 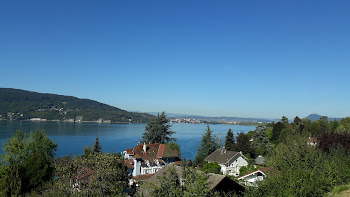 We followed the path to the of the end of the lake and then joined the path on the western side on the old railway were had cycled on the day before . We diverted off the path at Douscard and found a small grocers and purchased two slices of quiche and a wholegrain baguette for lunch. We then continued to Saint Joripz where we diverted off the path. Lyn had expressed an interest in a small extension to the route she had seen whilst Googling in the morning . I had downloaded the route onto the Garmin. The small extension was a loop that climbed up away from the lake to the Col de Leschaux a climb in stages up to 900m.
The route ascended thought the village of Saint Eustache then onto Leschaux. It offered fine views over the lake and down to Annecy. 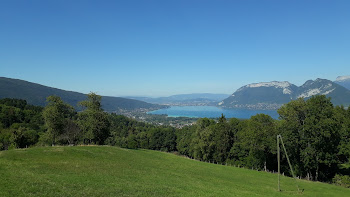 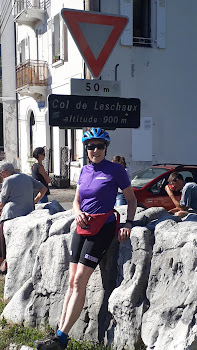 After Leschaux if was a 4 mile fast descent back to the lake bike path with more fine views over the lake.

On reaching Annecy we diverted to the old town for an ice cream. After the previous days meagre portion we decided on two scoops each and ended up with a very generous portion. 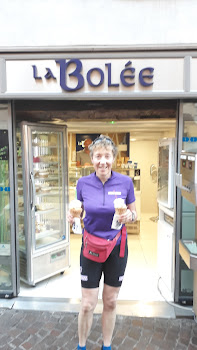 We decided to eat out for a change. A Thai restaurant was selected The Garmin took us within 50 feet but we could not find it. It was eventually located inside an arcade but was closed.A man passing saw our predicament and recommended another restaurant . He did not know the name of it but gave us the street name and said it was one street back from the canal.
After a comprehensive tour of the back streets restaurant Feuille de Lotus was finally located. The food was very good. They served s small selection of freshly prepared dishes . It was a little expensive 18 euros for s main course
but freshly prepared and good quality. We had Tom Yum and chicken curry and shared a portion of tempura vegetables to start. 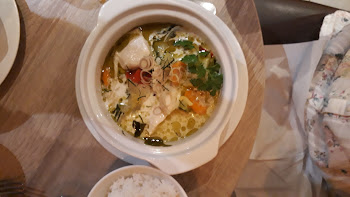 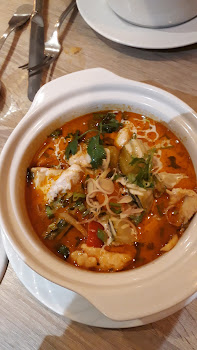 After a good meal the Garmin guided us back the mile to our apartment.