We were woken at 7:00am by the announcement breakfast was being served. We laid in for 30 minutes and had coffee, fresh strawberries and muesli in the cabin. We were called to the car at 8:25 and 50 minutes later had cleared passport control and were speeding along on the Dutch motorway system towards Emmelschausen. We stopped at a Later Place restaurant on a services for breakfast and selected a freshly filled tuna roll each. The first Brexton stop was taken at a rest stop once we had crossed into Germany 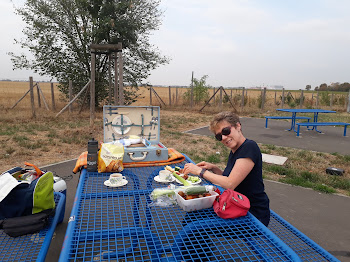 We then continued to our hotel. It's an an old mill located a few miles from Emmelschausen. We must be the only English couple staying as we were shown straight to our room and given the key without even having to give our name. 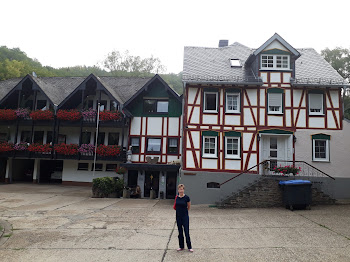 After a refreshing cup of English tea we drove back to Emmelschausen and cycled s section of the old railway line. We cycled for around 8.5 miles before we had to turn around .

We eat in the hotel. A chicken and middle soup to start followed by venison and wild boar goulash served with red cabbage and potato dumplings.

An unfortunate mistake with our German meant we had 2 glass of wine to drink rather than an e tea one to share. We returned to the room to update diaries a d plan Tuesday's ride.