The local bakery ànd Carrefour Express provided provisions for breakfast which we had sitting on the balcony. We decided to cycle the 30 miles along the old railway line from Annecy to Albertville. I had downed loaded the GPX file which was not really needed for the ride but was used to navigate to the start.
Our route took us to the lake. 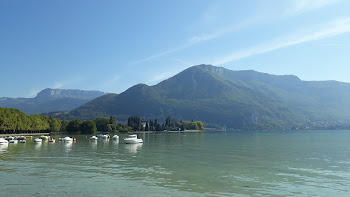 The path alongside the lake had a constant stream of cyclists but this thinned at the end of the lake after around 10 miles. It had good views across the lake and to the mountains.
The route was along the old railway lin
The first 18 miles were a gentle ascent and the path them decended to Albertville . The surface of the track was paved all the way. The last 5 miles
from Ugine on a cycle track alongside the road and then on the road.The last section to Albertville was on a path alongside the river. We crossed the bridge and followed the signs for the city centre, locating an open Boulangerie was more difficult then we anticipated but was eventually accomplished with the help of Google maps. We purchaed a filled baguette and then found somewhere in the shade to eat it s the temperature had risen to 32 degrees. The ride back was hard work in the heat and a headwind and gradient slowing our progress. 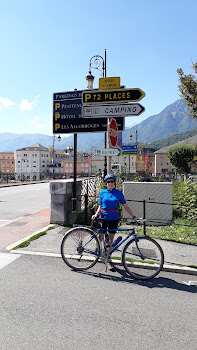 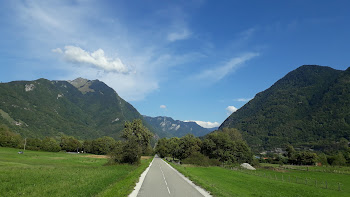 We stopped for a well deserved if expensive ice cream when we were around 6 miles for. Annecy . 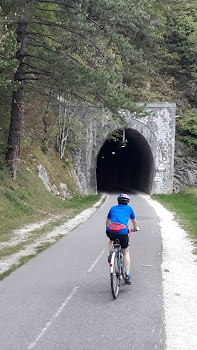 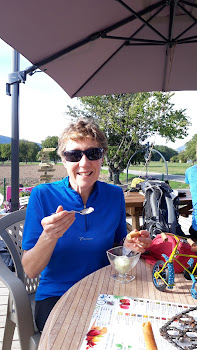 We continued along the bike path to the end of the lake and the Garmin then directed us back to appartment. A detour to the supermarket provided the ingredients for Lemon chicken which was eatern sitting on the balcony.

A ride of 61 miles with a high of around 32 degrees centigrade.