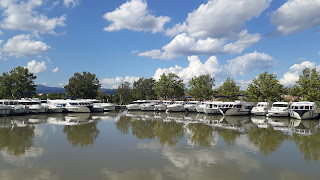 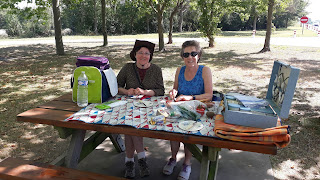 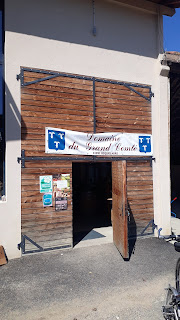 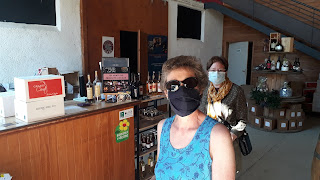 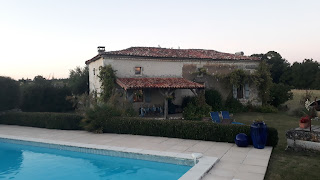 An early start. We had to be packed and off the boat by 9:00. We could have been ready earlier but it was gone 8:30 before some staff arrived and Robert could retrieve his car from the secure parking that was locked overnight. The bike carrier and bikes were removed from inside the car and put on the back. Robert, Lyn and Louise;s bags were stacked in the shade. By 9:30 the boat had been inspected and Gerry’s deposit returned. Robert drove Gerry, Chris and Roger to the station at Lezignan Corbieres so they could get a train to Carcassonne. He then stopped at the local Lidl and bought cakes and bread from the local patisserie.

The drive to Maison Les Fleurie was scheduled to take around five and a half hours. By the time he returned and the car was packed it was after 11:00 before we set off. We went via Michel Baylac, a wine and Armagnac producer Robert and Lyn had visited on previous trips to France, in the Gers region. Lunch was taken at the motorway rest area alongside the Canal du Midi. Unfortunately, we could not cross the carriage way to get to the canal.

The road was a peage to Toulouse and we then went across country. They was a slight delay whilst we located the cave. Robert and Lyn had had the same problem on their last visit, but eventually it was located.

On our last visit we interrupted the owner’s lunch but this time we were later. A friendly dog notified the owners of our presence and eventually a door opened a man appeared and indicated we should wait for 5 minutes.

A lady appeared, opened the cave and conducted tasting for us. Wine and Armagnac was purchased and we headed North. Kate took us cross country on minor roads and we eventually picked up the peage south of Bordeaux.  We used the owners stat nav directions to the the house but could not find it, so put the GPS coordinates in instead. The house was located but no one came out. We called  the mobile number we had and when they called back Robert could hear Pat speaking to us from their garden. Yvonne showed us round the house. It has everything we need for a comfortable stay and a kitchen stocked with utensils.

By the time we unpacked it was getting late. A quick pasta dish with Crème Fresh prepared and eaten, washed down with the complementary bottle of wine they had left us.