It was only a short drive of around 1hour 30 minutes to our accommodation in Saint-Germain-de- Confolens. We started with a trip to the boulangerie, parking correctly in a single space. We then drove the short distance to Yviers to show Louise the church and the dead pigeon. The pigeon was still there but I can report it was disposed of by the end of our visit. We spotted a little bar on the previous day’s ride and intended to stop for a coffee before setting off. It was closed but a sign on the door said it was scheduled to open at 11:00am. We waited and had two coffees and a hot milk. The owner turned out to be English who had lived in France for 15 years and would not go back. The menu of the day looked good, but was only served from 12:00 and we had a Covid test booked in Comfolens at 15:00.  We had intended to stop for lunch on the way to Confolens, but the first picnic area we stopped at was too busy and the others we passed were too near the main road. Eventually we decided to locate the pharmacy then find somewhere for lunch in Confolens. After the pharmacy was located we stopped for lunch in a pleasant spot by the river. We returned to the pharmacy at 15:00 for our Covid test, only to find our appointments had been re-scheduled for 18:10, 18:20 and 18:30. We are not sure why it was changed and checked the times when booking the test from England.

After a wander around the town, crossing the old bridge, we stopped for a drink at a salon du thé on the far side of the river. Louise even managed to get a completely free slice of Lemon drizzle cake which we all shared. Robert and Lyn had a speciality tea, served in cast iron teapots, complete with an egg timer to get the correct strength brew! We could access our accommodation from 16:00 so drove the 10 km to the house, unpacked the car and returned for our Covid tests at 18:00. The test was carried out in a gazebo that had been erected outside the building. Robert guessed incorrectly as after he and Lyn had had their samples taken, he thought Louise was going to scream. Instead she just giggled. It wasn’t the pleasantest of experiences.

The plan was to get something to eat in Confolens, but nothing was open. In the end we drove to Availles-Limouzine, but the restaurant we wanted to go to was full. We returned to Saint-Germain-de- Confolens and decided to get pizza from the wood fired Pizza stand by the river instead. The rain was so hard that instead of sitting by the river, we decided to get it to take away. Robert had to return Louise’s ‘cheese less’ pizza as it had cheese on it. Robert and Lyn’s pizzas acquired an additional flame grilled taste whilst being kept warm in the oven.  In the end the pizzas were quite good but very filling. 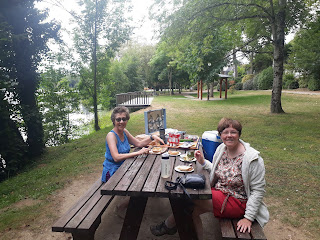 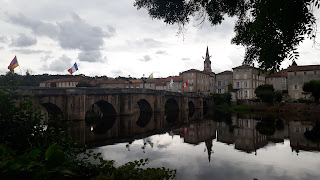 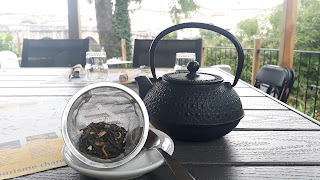 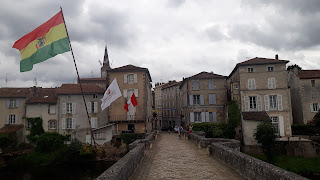 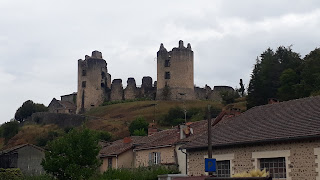 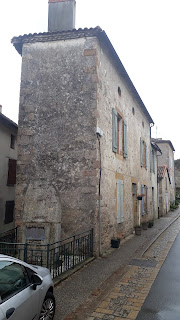 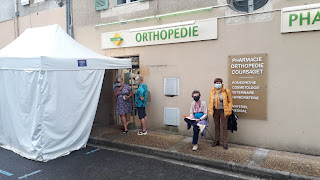