We left our mooring just after 9:00. It was 5 km to the locks at Beziers and we arrived in under an hour, turned around ready for later in the day and moored up. We all went off to explore.  Gerry, Chris and Roger set off on foot, Robert and Lyn by bike and Louise by Petit train. The flight of locks were impressive with 7 locks in a line. Robert and Lyn cycled down the locks and continued on The Canal Du Midi to Pont Canal. It was on the way to that bridge that the Brompton rear derailleur failed. The mechanism that moves the chain between the high and low gear range was hanging loose and hitting the spokes. Robert continued on foot to the Pont du Canal where he was able to made a temporary repair using a couple of short pieces of wire Lyn found that had been left on the ground. Photos and videos were taken and Louise was spotted on the back of the Petit train crossing the road bridge.

We crossed the bridge, walked down some steps and cycled along the river towards the town. Despite our visit being delayed by a year, the 1.9 million euro refurbishment of the old bridge to honour our visit had not been completed but they were making good progress. The main road to the old town was busy and the minor cobbled road was too steep for Lyn to cycle up on the single geared Le Boat bike. We decided to go back to the Canal and cycled to the basin and out of the town to the village of Villeneuve les-Beziers. The path was of tarmac and if we had had another couple of hours we could have continued to the Mediterranean. We turned around and spotted Gerry, Chris and Roger when we got back to the Pont Du Canal. We had had a few spots of rain shortly after we set off in the morning and this returned as we went back to explore the old boat lift that had been abandoned in the sixties. We all arrived back at the the boat at 1:00pm. The rain got heavier so we ate lunch inside.

It stopped by the time we were ready to set off. Lyn took over the driving and we returned back past Colombiers and though the Tunnel de Malpas. A short tunnel and the only one we have had to negotiate on the canal. We filled up for water at Pont De Poilhes. The hose pipe being connected to an automated dispenser that we had to feed with 2-euro coins to get 2-300 litres of water. 8 euros gave us sufficient until we return to Homps. Whilst waiting for the boat to fill with water Robert joined a group of cyclists for a publicity photo.

A few km beyond Pont De Poilhes we stopped at the jetty at Guery. A board pointed to a local producer advertising wine and olive oil for sale. Reconnaissance was sent ahead and whilst Louise stayed on the boat the rest of us made our way the short distance to the cave. We sat outside in the shade of a persimmon tree whilst Jean-Vincent introduced us to 5 local wines they produce. An organic white, red and rose, a red Minervois and a sweet Muscat. The tasting was excellent and very informal. We bought some wine for the boat and some to take home.

We moored for the night 50 yards from the jetty. Chef Chris produced an excellent Bolognese. It was eaten on the outside deck. The meal was finished off with a glass of the Muscat we bought and Louise divided the lemon tart we had bought her earlier in the day into 6 small pieces.

Chris’s puncture was finally repaired, at the fourth attempt.  The inner tube turned out to have separate holes and is now ready for Friday’s trip to the chemist for Gerry, Chris and Roger to have their pre-departure Covid test at a local pharmacy. 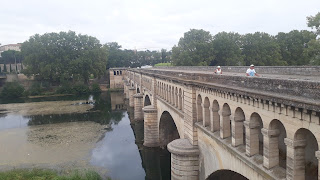 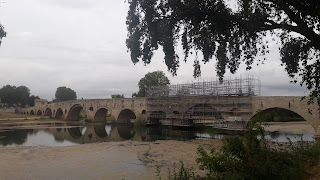 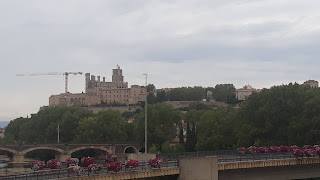 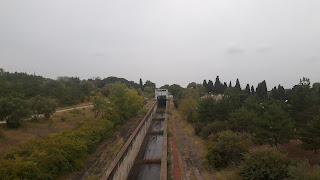 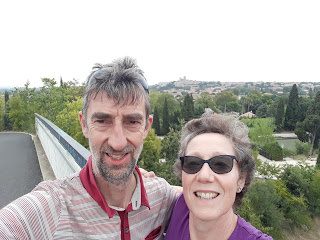 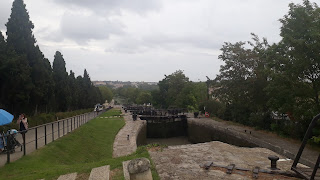 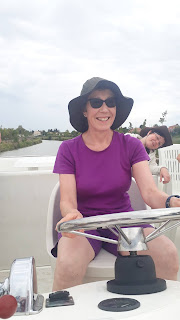 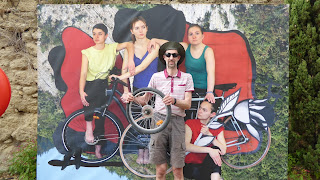 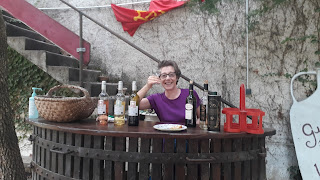