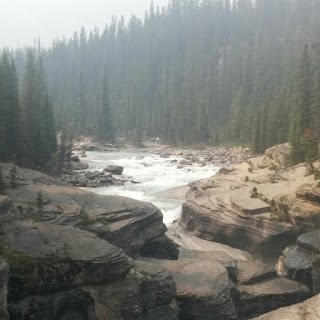 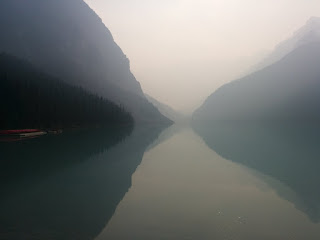 We had breakfast in the room. There were no spoon's so the Weetabix count remained unchanged. After breakfast we took the lift to the ground floor and the Interpretive Centre. It is run by Parks Canada and the film had been running for over 10 minutes before they unlocked the doors. We watched the last 10 minutes of an arty film with lots of splendid shots of scenery but no factual information. A lost opportunity.

We checked out and continued along the Icefield Parkway stopping first at Saskatchewan River crossing. The gift and souvenir shop provided  another shopping opportunity but we left without making a purchase.

Unfortunately the mountain views were still obscured by the smoke haze. We talked to a group of cyclists who had abandoned their ride 4 days early because of problems with breathing caused by the smoke. They had cycled over 1800km on this trip and across Canada last year so their general finess was not why they stopped.
A short distance further on and 300 m from the road side parking was the short decent to Mistaya Canyon. More impressive views where the river had carved the Canyon though the layers of sedimentary rock. We then continued to Bow Summit, at 2135m the highest point along the Icefield Parkway. A short walk from the car park provided an excellent view over Peyto Lake. We sat at the view point and had an apple and virtual cheese sandwich for lunch.
The faded blue of the lake tantalising us with what the view would be like on a clear day. A golden mantled ground squirrel ,obviously used to tourists, appeared as we were eating was fed nuts by a couple of children. 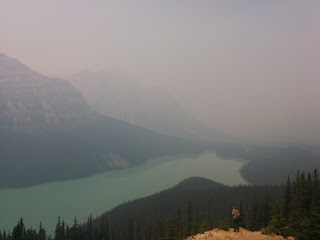 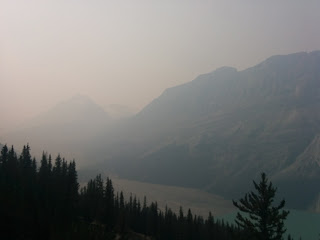 Next stop was Bow Lake. A photo opportunity, gift shop and cup  of tea.

The first place of interest after the Icefield Parkway is Lake Louise. It's the name of both the village and lake. Naturally we had to stop and take photos. We arrived late in the afternoon as the number of tourists started to thin. The lake was pretty but it was a pity the smoke haze was obscuring the mountains. The other famous lake in the area is Lake Moraine and as the distance to the Lake was around 18km we decided to drive to it. The mouth of the lake provided some good photo opportunities but for the best view you need to take the short climb to the view point. This gave a splendid view of the lake with its various shades of blue. It was approaching 7:00pm by the time we were down from the view point so we tried to eat in the Moraine hotel restaurant. The food looked excellent but their next free table would have been an hours wait. We drove to Lake Louise instead and ate in the Mountain Restaurant. The meal did not live up to the splendid scenery we had seen during the day. 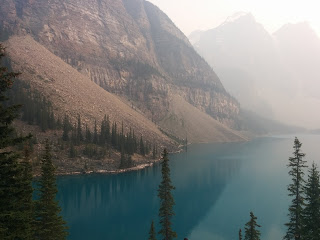 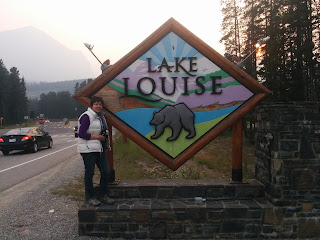