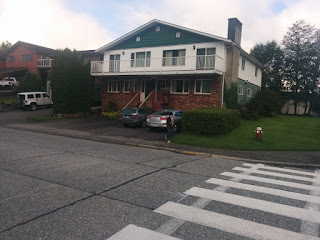 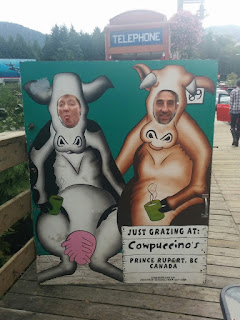 Breakfast was at 8:30. We sat with our hosts Irmgard and Hans and two German ladies who had arrived the previous evenning. We were presented with a piece of a freshly cooked tortilla one of Hans specialities and homemade bread. This was followed by slices of cold ham, salami and cheese and homemade jam. The Weetabix count remained unchanged. The German ladies we moving on to Stewart but we are staying for a second night. It was a short drive into town and after a stop at the post office and camera shop we paid our $6 and entered the museum of Northern British Columbia. The displays explained the history of the region from 6000 BC to the present day. Lunch was taken at Cowpuccino's on Cow Bay. We made a good choice it's an excellent cafe which we found later had been mentioned in our lonely planet guide. After lunch we drove the 20 km to North Pacific Cannery. It was used from 1889 until 1968. At its right it employed over 1200 people and was one of over 200 canneries that were active along British Columbia's coast line. The tour was very informative and one of our guides was a first nation Canadian who's Grandparents had worked in one of the building on the site. She now lives in more of the houses on the site and we even had a brief visit to her front room!
We just had time to visit the Ice House galley back at Cow Bay before return to the B+B for a cup of tea.