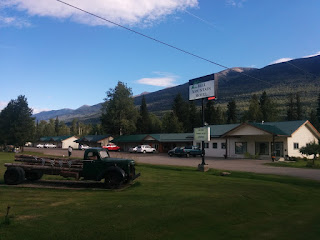 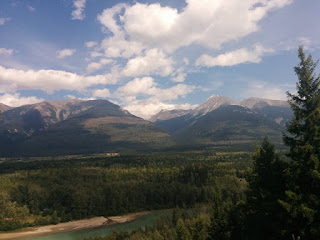 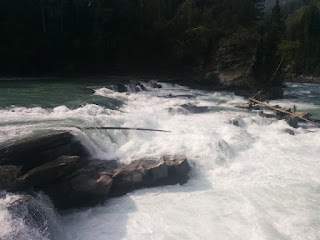 Breakfast was "served" at 8:00 it was then into McBride for a quick look around the town. McBride was built as a railway town. It was only connected to the highway when highway 16 was built in 1970. The town has around 500 inhabitants and some fine examples of woodern houses. A lot of the houses are now for sale and some of the business have shut.The main road in the town leads to the old railway station. It now houses the tourist information centre and a gallery featuring the work of local crafter's. To attract the tourists the town  has a tour of painted fire hydrants. Lyn decided to save her legs but Louise and I spent half an hour walking around spotting fire hydrants painted in themes including  cows, fishermen and an ambulance. By 11 we were off on the 16 towards Jasper. 40 km down the road and our first stop was the small village of Dunster. The old station now houses a museum but it only opened at 12 and we could see all the downstairs exhibits looking though the window and did not want to wait until it opened. A leaflet we picked up from the tourist information had and suggested route we could following on the opposite side of the Fraser river to the 16. This route was very scenic but the paved surface disappeared shortly after Dunster and most of the route was on mud and gravel. The 30 km to Tête Jaune Cache took just under 2 hours with stops. A late lunch was taken in a small restaurant by the side of the river. We arrived just in time as they did a buffet "breakfast" until 2:00 pm on a Sunday.

The Rearguard falls 5km further on provided a perfect viewing point to watch the Chinook salmon try to jump the falls to return to their breeding spawning grounds further upstream. A fantastic sight and well worth the effort of the short descent to the falls.

The road between McBride and Jasper is a lot more scenic with some plendid  views including Mount Robson and Mount Terry Fox named after a 21 year old cancer sufferer who after having a leg amputated above the knee set off to run across Canada. He got halfway across before the cancer spread to his lungs and he had to give up. Although he did not complete his run he did succeed in his aim  of raising $1 for every Canadian. He died the following year a national hero and inspiration to others.

As we crossed from British Columbia to Alberta the clocks changed and we lost an hour.
The first wildlife was spotted , a moose grazing by the road, before we arrived in Jasper.

We are staying at The Tekarra Lodge. Its is a small complex of Cabins just outside Jasper. Kate did not recognise the address so my printed map came to the rescue. They had some vacancies so we were able to swap our Lodge for one with  2 separate bedrooms The price was the same as the one we had booked.

The Launderette was open when we arrived. Everything was counted in but some items were missing in action.