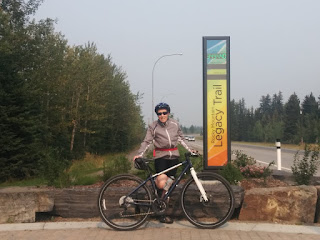 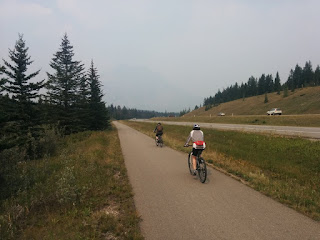 We arrived yesterday evening just after 10pm. We passed the Krypton Factor test to gain access to the apartment.  5 digit pass code to open the access to the underground parking. 2 digit code to access the room lock box to get the key to the room and then we were in. The accommodation was recommended by a work colleague of Lyn's and is the best we have stayed in on this trip.. We have two very large bedrooms. Mine and Lyn's has a  large shower, Jacuzzi bath and his and her sinks. Louise has to be content with 2 queen beds and separate bathroom with bath. We have a massive open plan living area with a kitchen and outside balcony.

The day started cool but the forecast was for a dry day and an afternoon temperature of around 20  degrees so we decided to cycle the Rocky Mountain Trail also known as the Banff legacy trail from Canmore to Banff.

We hired bikes from Gear Up. They had a bike that would fit me, were friendly, had better bikes than the shop in town we tried first and rejected because the frame was too small for me. They were also $15 cheaper. The day hire is $45  for a full 24 hours. "Bring it back around this time tomorrow ,we won't charge you if you are late".

The Rocky Mountain Legacy trail was built to celebrate Parks Canada 125th anniversary. Its a 26 km trail that connects Canmore and Banff. The route runs parallel to the main highway and would have offered stunning views of the mountains if the smoke haze had not been present. The path is 3 metres wide and has a couple of small climbs with only one very short section you would describe as steep. It runs parallel to Highway 1 and the road noise was a little invasive at times.

We arrived in Banff just before 2:00pm. Lyn rejected my first suggestion for lunch. However the second offering Wild Flour artisan bakery cafe had her seal of approval The food was excellent and judging by the queue of customers we are not the only people to reach the same conclusion. After lunch Louise decided to do some more souvenir shopping and get the bus back whilst Lyn and I cycled backed. However when she left I realised I had not shared the magic code to get though the main door. Lyn and I then toured the high Street searching likely shops until at last she was spotted.
The ride back had more down hill sections so was easier than the ride out. Louise returned her bike to the shop but Lyn and I cycled back to the apartment. We  arrived back in time to enjoy a swim,sauna and hot tub. The ingredients for tea were purchased from Save On Foods and an excellent pasta meal then prepared in the apartment. 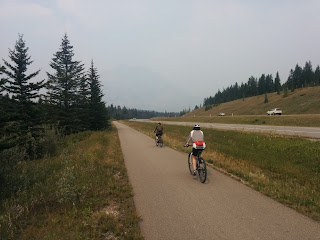 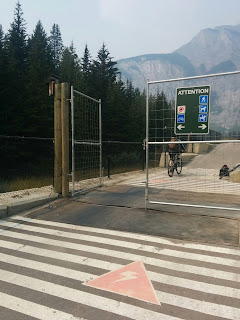 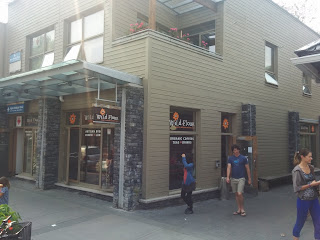 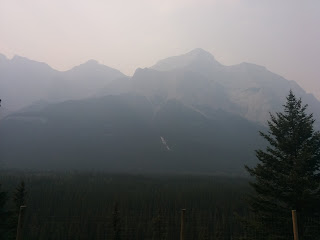