The Drive to Port Hardy 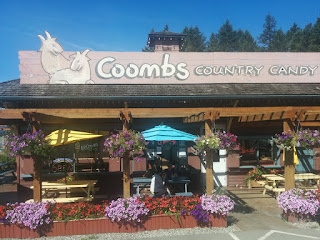 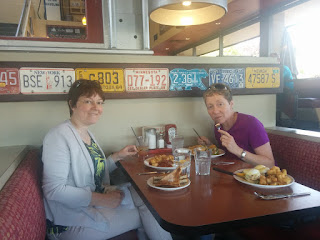 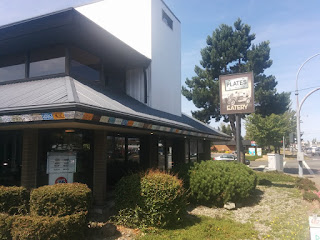 The car was packed. The luggage appears to have expanded but it was finally found a home in the car. Louise still has more Weetabix than she started the holiday with. We had time for a quick stroll to Terrace beach. It was misty out a sea and the distance sound of of a fog horn could be heard. The first stop was the Launderette to check for missing items of washing that will probably turn up in a case. We broke the journey at Coombs Country Candy. A sharp turn and a little hooting from behind saw us safely off the highway and into the car park. We had a quick drink and purchased some samples. It was then onto Cathedral Grove. We followed the path through the woods to the largest tree in the park. A giant Douglas for that's over 800 years old and stands at over 76 metres tall. Our route North took us past Comax where Louise arrange to visit Sheila and George. We planned to arrive at 2:00 and as we arrive in town at just after 1:00pm  had time for a quick lunch in "Plates". The diner style restaurant had number plates from around the world on its wall and as table decorations. We arrive at Sheila and George's just after 2:00. Sheila was Louise's mothers cousins Mary's bridesmaid. After a struggle with the technology and and a neighbours Wi-Fi password that did not work we were finally able to Skype  Mary. They talk on the phone regularly but had not seen each other for over 10 years. The wonders of the Internet.
Whilst Sheila and Mary talked Louise took Sheila's mobility scooter for drive with George. She passed her " test" so was then let loose on George's faster model with its go faster switch. We were treated to some excellent home made Salmon puffs and a several slices of Sheila's homemade Zucchini cake. When we left we were given a fresh pear each from a neighbours tree and a couple of large cakes for the journey.

The drive to Port Hardy was uneventful. We did not have time to stop at Roberts lake. As we drove North the traffic thinned. We made up time on Kates estimate but lost it again when we had go wait 15 minutes to pass thought a one way section in roadworks. We were the first csr in the line. We arrived at the Quarter Deck in just after 8:00 having taken a small diversion via the airport as we had not entered the exact address into Kate. We eat on the "pub" next door. The meal can best be described as filling.
We leave tomorrow to get the ferry at 7:30 but have to be at the port 2 hours before the sailing. The computer said no when we warned to pay for the room tonight to save time. We dock in Prince Rupert at midnight tomorrow so the next post will be delayed