We had a plan 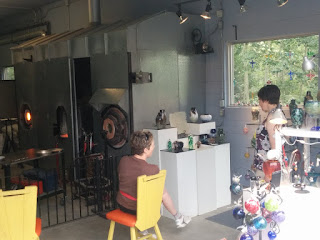 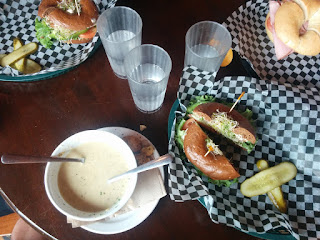 Last evening's plan looked good on paper, breakfast, book a brewery tour, visit glass studio, shops and lunch in Canmore, return bikes ,1 pm brewery tour then canoeing in Banff.
We the first part worked(breakfast) however on getting to the brewery we found it did not open until 11.00am. The glass studio was a 10 minute bike ride , Louise followed in the car. However when we arrived we found  the studio did not open until 11 either and it was only 10 :40. A visit and coffee at a nearby delicatessen solved the problem.  Fireweed Glass Studio is run by 4 local artists. The work was excellent and we liked most of the items on display. One of the owners Barbara Rumberger  was in the studio. She was very friendly and gave a quick demonstration whilst we rearranged the display and selected some items to purchase. Lyn and I bought a couple of small pieces and even Louise joined in. By the time we left it was lunchtime. The Rockie Mountain Bagel Company provided some excellent sustenance. Eventually it could not be put off any longer and the ladies had to visit the shops. They were detained by a shop that sold flannel clothing and spent so long in there they needed an ice cream or in Louise's case a crepe to recover. The bikes were then returned and it was to the Bears Paw brewery for our 4:00 pm tour. Having read the extensive contract and signed the waiver the the two of us drinking beer were given the first of 4 small sample's. We then had a larger glass of the one we preferred to take in the tour. Louse had various flavour sodas to try but the choice was more limited. The tour was more sampling than information but as we were taken around the brewery the brewing and bottling process was explained along with some more samples to try.
From a production engineering point of view the process looked a little disjointed and had plenty of opportunities for improvement. We left with our souvenir bottle opener and Louise did the driving.
Back in the apartment we made the first attempts at packing and had time for a hot tub and swim before another excellent meal. Fresh sweetcorn followed by bacon wrapped pork tenderloin then fresh fruit and yogurt. 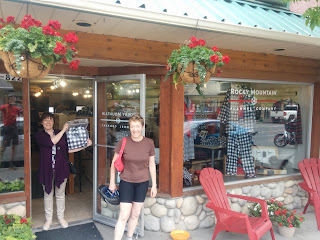 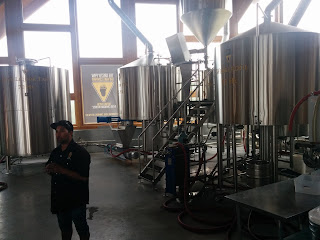 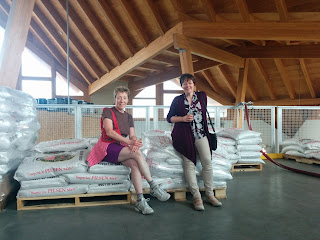