We were up early and got everything packed and started loading the car before breakfast. It was a good job as Zdislava had overslept and packing the car probably woke her up. She apologised when she brought us our breakfast 15 minutes after the time we had asked for. We each had an omelette with peas and shared a plate of cheese some of which was saved for a picnic on route. We left around 9:30.

The first stop was the Tesco in Chodov for Czech beer and wine. 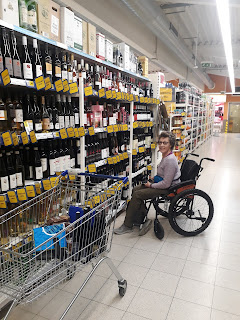 We then went round the corner to Libl and finally filled up with petrol. We headed north to the border town of Zweibach around a 40 minute drive. We needed to avoid the motorway as we had not purchased the required permit. A post office was located in a small village we passed through and postcards posted. 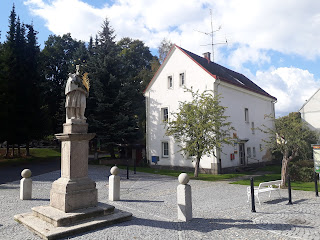 We will see how long they take to reach their designation. As soon as we crossed the border Kates displayed a map and was programmed to take us to our destination of Gasthof Hillebrand just outside Buren. We followed the route she suggested but might have been better heading across country to Gera. A Brexton lunch was taken on route. 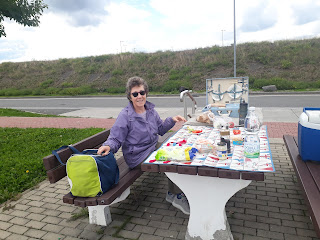 There were only a couple of minor incidents on route. A lorry had shed a tyre and left large remnants and a mud guard all over the road which Lyn had to avoid and roadworks at Bad Hersfeld cause a long delay We had to avoid this by leaving the autobahn and going through the town. We arrived at the Gasthof at 18:10 in time for a cup of tea before our evening meal. We each had the same 2 specials from the board, onion soup followed by pork medallions in black pepper sauce accompanied by several glasses of Warsteiner the local beer. 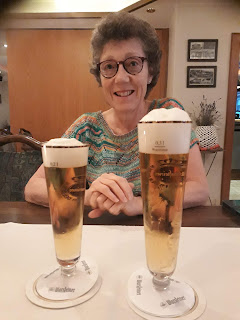 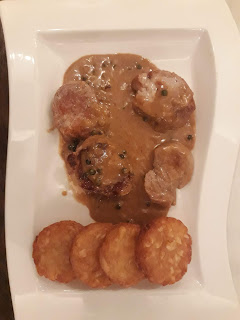