The previous evening, I had mapped mapping a couple of potential cycle routes from the pension. Unfortunately, the weather forecast proved to be correct and it was not a morning for cycling, cold and with heavy rain.

We were first down to breakfast at 8:00 and after breakfast rather than cycle decided to drive the 7km to Tachov and look at the town and visit a cycle shop. We parked on the outside of the town and walked / wheeled the short distance to the main square. The cycle shop was located. It should have been open but there was a handwritten note on the door saying it was closed on the 17th. 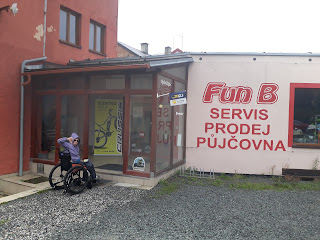 Lyn had wanted to get some full-length cycling bottoms as she had not brought any with her. We had checked the temperatures before we left England and were expected lows of around 15 degrees and the current forecast is 6-8 degrees. 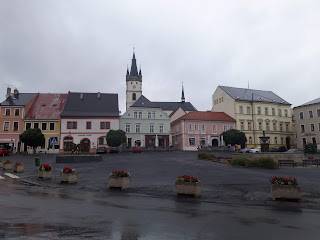 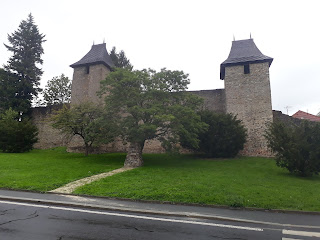 The statue by the church just off the main square marked then two bombs that landed on the church during the war but did not explode. 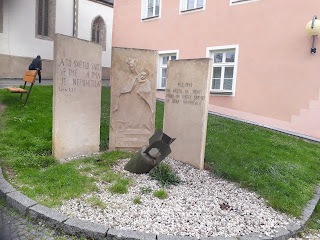 The weather had not improved so after filling up with diesel we drove the 12 km to Plana.  It was paid parking in the main square and as we did not have any coins we parked on the outskirts and walked thought the park to the square. 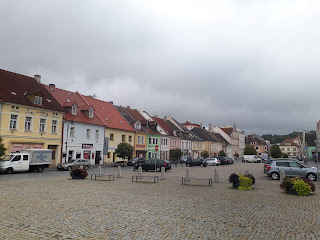 The tourist information was closed and as we could not find a café for a soup had excellent cake and coffee in a small patisserie instead. Two coffees and cakes costing us less than £6. We then tried to visit the observation tower but the parking close to it was closed an there was not any suitable parking on the road. 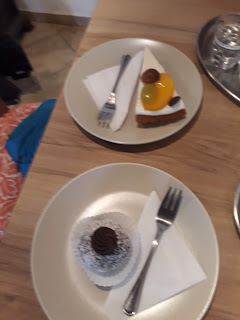 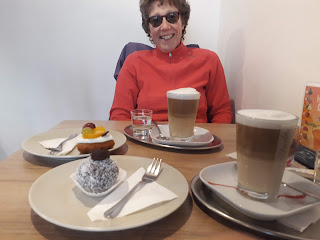 Having failed to find a suitable parking spot we continued to the spa town of Konstantinovy Lázně. It was nothing special and we could not find suitable café for a late lunch. The weathers improved so we returned to the Pension arriving just after 15:00. Time for a snack in our room before heading out on a short ride. The Garmin suggested 3 circular routes and Robert picked one. We climbed up the hill from the pension before eventually turning off on a small, paved track thought the woods. 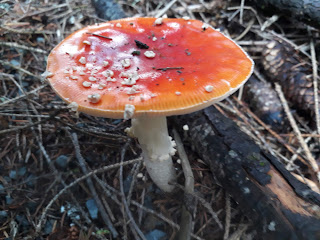 The toadstool above is probably not edible but there were plenty of mushroom pickers with baskets of wild mushrooms in the woods. We followed a couple of numbered cycle paths heading towards the German boarder then turning towards Tachov. The weather was cold with the temperature dropping to 5.8 degree at one point. We also had to shelter under a tree for a few minutes during a short shower but the final climb back to the pension was in sunshine. 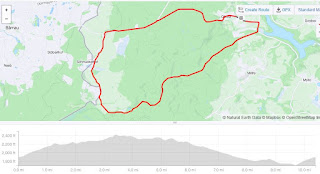 We eat in the pension again. The meal was tasty but pork tenderloin was undercooked so we did a “Mr Bean” so we could present two cleared plates