Floriade is a world horticultural exhibition that takes place in the Netherlands only once a decade.

We first visited in 2002 and again in 2012 so decided to make it a hattrick in 2022. This year exhibition was being held in Almere a 45 minute drive from the apartment. We bought our 29 euro entrance tickets online before we left home and also had to pay 14 euros to park the car. The carpark was a 10-15 minute shuttle bus ride from exhibition. 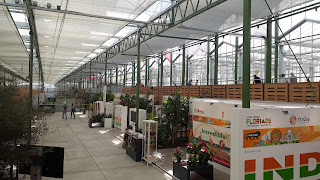 The site was massive, around 60 hectares in total and even had a cable car going across the site and a little train running round the site you could pay 6 euros to hop on and off.

The exhibition was divided into zones with a couple of the areas on small islands.

Lyn would have struggled to walk to the entrance from the bus but we were prepared and had taken her wheelchair.

We started in the large green house. Exhibits included information on flower growing, pest control , recycling and floating hydroponics to grow your vegetables. The later has many advantages and removes the need to weed and dig the soil. 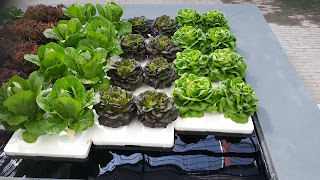 After an early lunch and coffee we continued round the rest of the greenhouse. Not many things to sample but we did get a free punnet of cress. Lyn checked the sign with Google translate before we took it and we also had taste of cooked mushrooms. We then continued outside first to the urban districts with exhibition from counties around the world and then across to Ultopia Island. The lookout tower was closed but there was plenty of other things to look at. 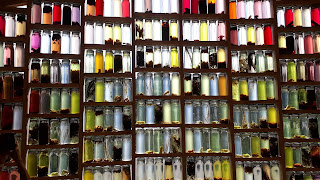 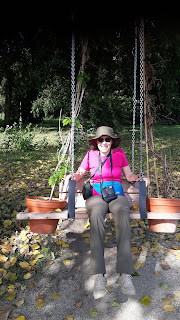 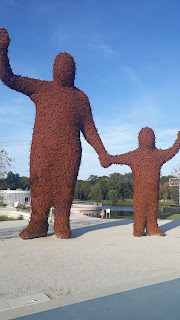 A snack of poffertjes provided more sustenance. Mini Dutch pancakes severed is cream and icing sugar. A tour of Green Island followed before we caught the cable car to cross to Eco District. We had planned walk round the Eco District but the cable car journey had changed to a return single trip. Lyn read the sign before got on but the couple in the gondolier behind had not. When we arrived at the designation, they got up to leave only for the doors to stay close and gondolier set on the return leg of the journey. 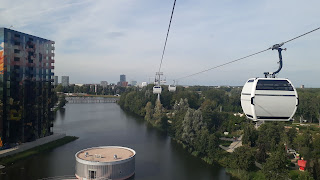 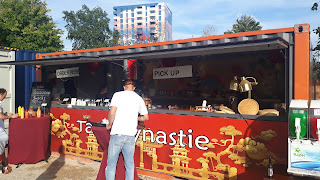 We then walked / rode back to the Urban area. An outside catering stall provided a tasty wok stir fry. We then continued round the rest of the site. It was a  hot day and could have done with a water fountain when we went in but only spotted one just before we left. Having found one we then found a second by the entrance. 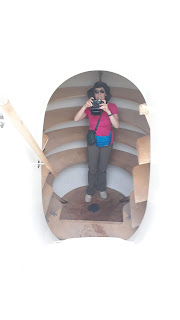 We left at around 7:00 pm just before the exhibition closed. The first bus was too full so we got on the next one. It should have been around a 20 minute wait before it set off but the driver waited longer and the driver even when round the bus counting up how many cars people had in the carpark.  When we got to the park and ride there were 11 cars left in the massive carpark. They had even lifted the barrier so if we had not prepaid we could have left without paying.

We were back at our accommodation at around 8:45. The pancake house was closed so we decided to eat in the restaurant next door. After a quick drink of water and a wash we walked across but they had stopped serving food. We returned to the apartment and had tea with the food we had got in.