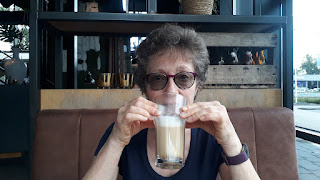 We did not partake of breakfast in restaurant but instead our breakfast was based around the prohibited items we could not import into Holland. We finished the fruit butter and cheese and remains of the salad. We docked just after nine. Once we got off the ferry it was an hour wait to clear the passport check and we then drove straight thought nothing to declare. We headed towards Amersfoot but stopped in the outskirts of Gouda for a coffee
Robert had a call from the alarm company about a fault on the alarm at work so had to make a call on route. After Gouda we continued towards Amersfoot and tried to park in the centre.  We drove into the Q car park but when we saw the cost of 1 euro for 20 minutes decided to find somewhere else to park. We had to pay 1 euro to get out and after  problems with the machine and credit card a local very kindly paid!
We found some free parking in a small nature reserve about 3km from the centre and then cycled into the centre.  We did not have time to go round the Mondrian House but after exploring the old town centre found a cafe for a late  lunch .
Supplies were then purchased from the peanut butter shop.  A shop that just sold peanut butter.  6.5 euros for  450 ml jar. They had a wide selection and opted to purchase a jar of date and cinnamon.
We then cycled back to the car and had to shelter for a few minutes on route to avoid the rain.
The car was parked close to a farm cheese shop and as it was open, we took advantage and purchased some cheese 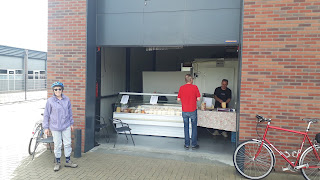 We arrived in Vierhouten just before 17:00. Small hamlet with 511 residents but several good restaurants and an ice cream parlour.
Kate took us straight to the apartment Bomals and we locate the key in the box outside and unpacked.
the car. The is on the ground floor apartment is well appointed and if we fall out can have separate bedrooms! 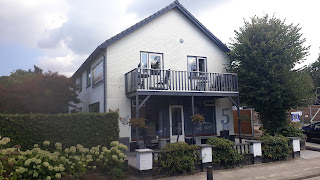 If was then short a drive to the supermarket Nunspleet to get some food as the small shop in the village closed at 17:00. On returning to the apartment an evening meal off a schnitzel with sauteed potatoes was prepared. 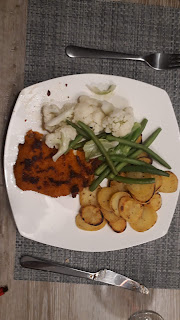