The forecast for the day was rain but we decided to cycle to Munster anyway. We started by riding to the Ems river and this time heading south. The rain had stopped before we set off but light rain started when we reached the river. 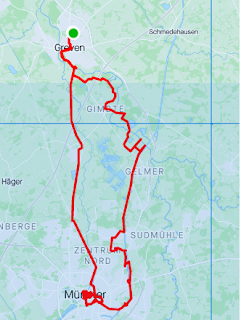 The first mile followed the river and passed several assorted sculptures. The Ems bike path then went away from the river but we diverted off it and followed the signs for Munster. It took us the most direct route on a dedicated bike path but alongside a main road. 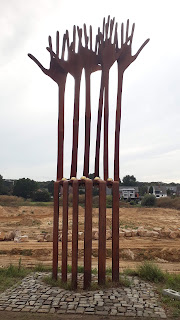 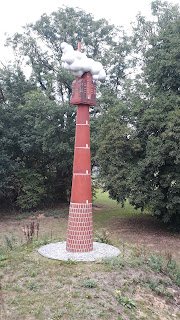 The rain became heavier at times but to too heavy we needed to seek shelter. It stopped before we reached Munster. The temperature was a bit of a shock as it dropped to around 12.5 degrees. On arriving in Munster we followed the signs for the centre. Riding a short section on the dedicated cycle ring road that goes round the city.

Lots of people were riding  e-scoters and they were being left abandoned  all round the city.

We cycled to the cathedral then round the main streets. We tried to avoid the pedestrian areas where you had to walk with you bike. Lunch was taken in the square by the cathedral. 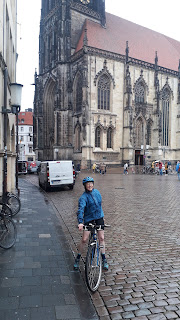 Not sure if that the normal tune. 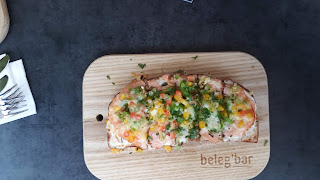 We shared an oven baked Pull pork and salmon oven baked open sandwich. The coffee at 4 euros was a bit steep so we passed on that . We then toured the town trying to find the tourist information. It was eventually located and a 1:20 000 map purchased to aid navigation on the way back. We planned to cycle down the Dortmund Ems canal then pick up the Ems river.

Getting the correct road out from the centre was a bit of a challenge.  We were even helped by a local lady who thought she was helping and gave us directions in pigeon English that did not make any sense. We nodded politely and continued looking on the Garmin and map after she left.  We eventually located the correct road and found the canal. There was a debate which side to cycle. We were advised to cycle on the left hand bank but the path on the right was better so we swapped sides. The path on the left then looked better so we swapped back only for the path to run out, So we swapped back sides again. 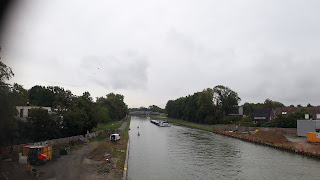 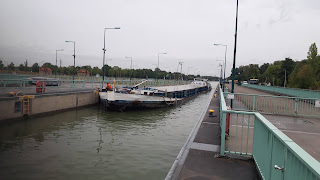 A two-mile section of path was blocked off where they were laying a new path. The hot tarmac was still being put down so we had no options other than to follow the signs for the diversion which in typical fashion ran out. The Garmin guided has back to the canal and we continued on it until we diverted off on minor roads to get back the Elms river. We tried to stop for a coffee in a small café but they had stopped serving so we continued back to the flat. A round trip of 35 miles.  Chicken curry was prepared for tea, blogs updated and then we logged onto the YouTube to catch up with some Vloggers we follow. 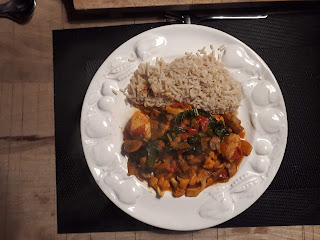