Drive to Europort and Morning Coffee in Hull

After another good breakfast the car was packed. The back seats were put down so we would have more room for German beer. 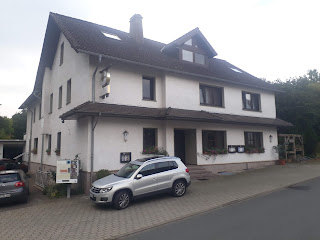 We left the Gasthof just after 10:00 and drove into Buren and Google Maps directed us towards a beer cellar Lyn had found. Beers and wine were selected and an empty crate taken to pack them in. We will need another visit to Germany to get our deposit back. The lady on the till was very helpful especially when I tried to return our Dutch beer bottles rather than the German ones. *1. The correct empties were retrieved, and the bill paid. 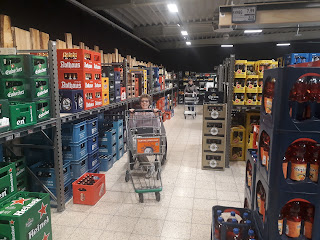 The car was repacked, and we set off around 11:40 driving to the EuroPort ferry terminal. Kate selected a route via Arnhem and Rotterdam.

There was a slight delay in some road works, but we arrived in Holland without incident. We stopped in Tiel to visit a Dutch Jumbo supermarket. The one we found on the way into town had restricted parking outside and a car park underneath which would not be ideal with the bikes on the back of the car. We continued to a second Jumbo supermarket on the outskirts of the town. That had free parking but some viscous speed bumps which caught the bottom of the towbar. Food for our evening meal and breakfast was purchased and empty Dutch beer bottles returned. It was now after 4:00pm and we had not had any lunch. The café outside the Jumbo did not look inviting so we decided to drive towards the port to see what we could find. A McDonalds was spotted just before we re-joined the motorway. A last resort.  An expensive Fillet-O-Fish and fries were purchased. A medium fries costing 3 euros. 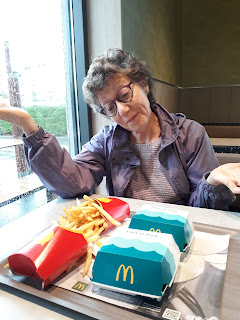 We continued to the port, arriving just before 18:00 to join a very slow-moving queue of cars. When we finally got the desk they wanted us to check in in the terminal but that changed when we explained Lyn could not walk very far. We drove onto the boat and were helped with our luggage to the cabin when they saw how much we had to carry. The largest items being the Brexton set and cool box.

We had booked a four berth cabin to get a little more room. The upper beds were stored in the ceiling and the blog and diary was updated and tea eaten. 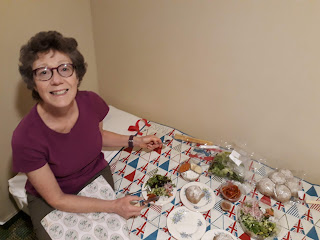 We wandered up to the Sun Lounge before retiring to bed. We awoke by the usual early morning call to tell passengers breakfast was now being served. We had ours in the cabin about an hour later. We docked before 8:00 am but were the last level to be called down to the car. When we finally go off the ferry we joined a long queue of car waiting to clear UK customs. We were one of the last cars though. We departed the port and stopped in Hull for a bacon sandwich and a coffee at “Next Door by Nibble”. An excellent find and popular with locals and dog walkers. 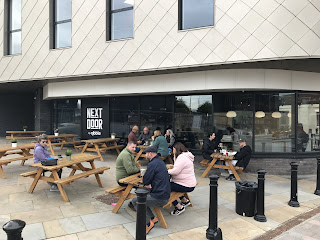 We had our coffee and roll watched over by the "security guard" from the building site next door. 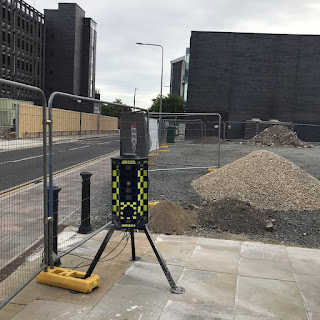 We then continued to drive back and completing a round trip of 1626 miles.

*1 - The lady on the till was helpful but it was only when we got back to England and checked the receipt, we found we had been charged for 2 crates of 6 bottles of wine instead of 2 bottles. Something we are in the process of trying to rectify.